Previously, on MinerBumping... Agent Kalorned got a bad feeling when he saw Skiff pilot Vipsla waltz into the Gamis ice anomaly with an Orca alt in tow. Vipsla turned out to be a belligerent Russian who articulated his refusal to buy a permit in the most pungent of ways. Kalorned used a combination of ganking and bumping to shut down Vipsla's mining operations for hours at a time.

For weeks, Vipsla refused to leave Gamis. He accepted the fact that Kalorned's presence made it impossible for him to mine for most of the day. Even after Kalorned's alt wardecced Vipsla's corp, the miner continued to bring his Skiff and Orca into the ice anomaly. Until, one day, the Orca was caught. 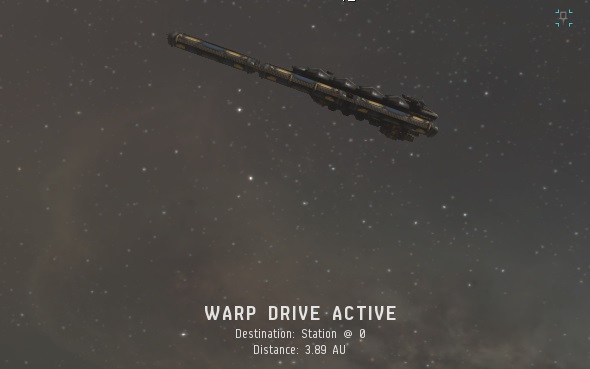 Kalorned's wardeccer alt tackled Vipsla's Orca alt. As the miner watched his ship's shields peel away, he ejected from the ship in disgust. Kalorned boarded the free Orca.

Immediately after the Orca was liberated, Kalorned received two payments of 10 million isk: One mining permit for Vipsla and one for his Orca alt. The miner had surrendered at last.

Vipsla was suddenly in a much more diplomatic mood than ever before. He initiated a private convo with Kalorned. As a gesture of good faith, the miner spoke English so Kalorned didn't need to use Google Translate. But just as Kalorned feared, Vipsla's good manners were aimed at getting his Orca back. He didn't really care about Kalorned's feelings or his Code. 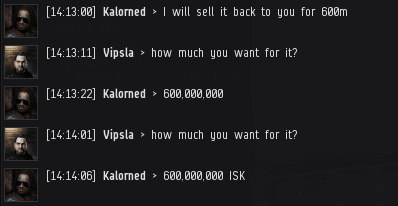 When negotiating, it's important not to appear too desperate. Vipsla was practically tripping over himself in his rush to get an asking price for the Orca. 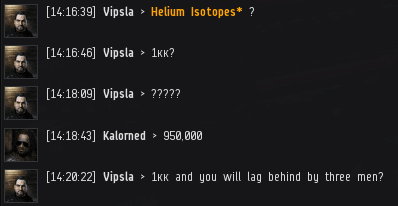 Vipsla didn't have the cash on hand, so he offered to buy the Orca with Helium Isotopes. 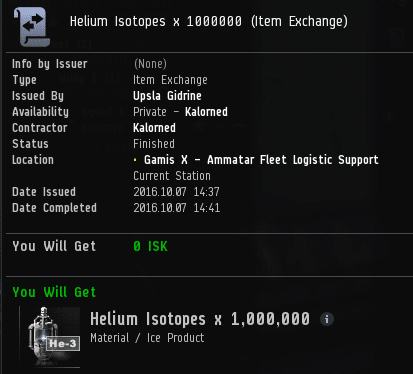 Kalorned valued the isotopes at approximately 630 million isk, more than enough to cover the price of the Orca. Our Agent was now ready to return the Orca, just as soon as he'd determined there weren't any more loose ends to tie up--while he still had Vipsla's attention.

Ah, yes. The logo copying issue. Now was an excellent time to clear that up. One more payment would do.

Our Agent was willing to be flexible on the trademark infringement payment. Worryingly, the miner seemed to lack faith in Kalorned.

Vipsla began to panic. He was coming dangerously close to questioning Kalorned's integrity. Which was pretty rich, coming from a guy who'd been illegally mining in Gamis for weeks.

Now Vipsla claimed he was completely broke, and therefore unable to make any additional payments. But our Agent believed he was capable of so much more.