Previously, on MinerBumping... August II Crendraven bought a mining permit from Agent Mildron Klinker for the sum of 10 million isk. For several months, he mined in peace. But when his fail-fit Mackinaw was ganked for mining AFK, he began acting like an entitled brat. Mildron thoroughly investigated the matter and determined the gank was justified. Crendraven questioned Mildron's integrity and vowed revenge.

Filth gets no respect revoke your own ass. Everyday I am going to post your honorless statements in recruiting. ... think your playing me ... see how recruiting goes butt ead too cheap to admit a mistake.

Crendraven's revenge plot was to question Mildron's honour in the in-game Recruitment channel. In doing so, he would ruin the CODE. alliance's reputation among new players.

Your an honorless pig not really worthy of a man;s response. Youhave no CODE your are a child who cannot admit his mistakes only takes but not repays. HOW YOU BECAME a CEO is mind warping. Pay up useless or ciontinue to sit with the women. Shame on your worthless name.

Mildron was skeptical. He'd seen many carebears make threats, but few even made the slightest effort to make good on them. Our Agent saw little danger here.

You are honorless so is your group. Pay me or get old waiting for me to stop badmonthing your worthless ass. CODE ou have done or don't have the intelliect to obey your own CODE

Crendraven again threatened to fill the Recruitment channel with poison. For the first time, Mildron began to fear that Crendraven might actually carry out his mad scheme.

I just got bounced (silenced) from Help channel for bad mouthing you. I am a pay player. I am going to bad mouth you on Recruitment .. if they bounce me there I will quit Eve and one more dollar will leave this game. Be proud of yourself ... you miserable scumbag.

Then came the terrible confirmation: Crendraven had already put his plan into motion. There was no telling what vile things Crendraven had said about CODE. to get muted in the Help channel. Mildron immediately sent a spy into both the Recruitment and Help channels to find out what was going on.

Crendraven was making savage attacks on Mildron's good name in the Recruitment channel. He didn't seem to be making much of an impact, but the miner's mudslinging campaign had only just begun. Mildron's spy in the Help channel notified him that Crendraven was now un-muted:

To say that Crendraven had become a loose cannon would be an understatement. Two different ISD members struggled to rein him in.

The Help channel took pity on Crendraven. Apparently they didn't seem him as a rebel champion--he was merely another victim of the Code. Mildron's spy returned his focus to the Recruitment channel:


August II Crendraven > CODE has no CODE the new CEO is a fella with no moral compass so his word means less than a fairy ... Milfron Klinker CODE CEO and liar
August II Crendraven > CODE honorless useless worthless
Jecka Sharvas > where did the CODE person touch you?
Trump Rising > up the bum
Jecka Sharvas > the bio tells all, a former code person :p

Crendraven made the classic mistake of taking his rhetoric too far, too fast. He had little credibility with the masses now. 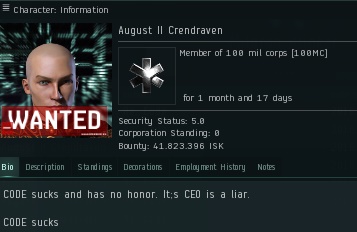 Like so many others, Crendraven's entire identity revolved around his opposition to the Code. In the place where he used to have a mining permit, a monument to his hatred now stood.

Crendraven became discouraged by the reception he was getting in the Help and Recruitment channels. Honestly, what did he expect, a ticker tape parade?

IRL been in four wars dealt with men all my life can't do it without honor and your word . Also did last twenty years in business, your wird means everything... I can see mistakes but not a nunch of kids poop for reasons you stink and are not worthy of conversation CODE has no value and as CEO you add nothing Pay for your mistake like a man

Crendraven had an impressive background. He'd spent the last 20 years as a businessman, and before that, he'd fought in four different wars. Still, even the most extraordinary men have their limits. Highsec mining was too much for him. Agent Mildron Klinker finally responded, sending the miner an encouraging message:

I've been in several wars in this game, dealt with all kinds of people all the time in Eve Online. Have honoured the Code and my word always! I sell alot of dropped mining equipment to miners who do have a valid mining permit, and i'm known for seeing mistakes made by permit holders. (I'm specially known for not revoking permits after a permit holder didn't follow the Code the first time).

Our Agents never give up. They always look for the best in every miner. Mildron's name had been slandered in two different in-game channels, but he repaid Crendraven with kindness.

Your a spineless piece of crap CODE the scumbag union selling protection with no honor
Not one ear in Eve won't know your name nor will they pay anymore. I am joining those that fight you.

Crendraven no longer believed he could defeat CODE. by smacktalking in Recruitment. He planned to join an army of anti-Code PvP'ers. If they exist, Crendraven never found them.
Posted by MinerBumping at 18:27