The Angel of Nakugard, Part 3

Previously, on MinerBumping... The Nakugard system proved a fertile ground for selling mining permits. Agent Alt 00 taught hunter19741 the Code by ganking him twice. He thanked her by buying a permit. Now he had to face peer pressure from the rebel miners of Nakugard. 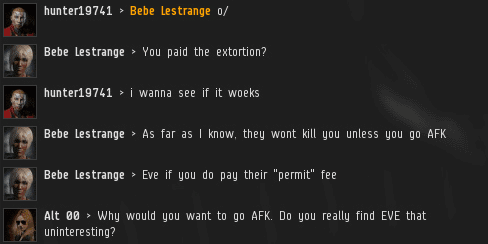 Bebe Lestrange didn't waste any time in questioning hunter19741 about his decision to get right with the Code.

Bebe didn't like what she was seeing. She became passive-aggressive.

The rebel miner didn't know it yet, but Alt 00 had recently had other successes in reaching out to Nakugard miners. 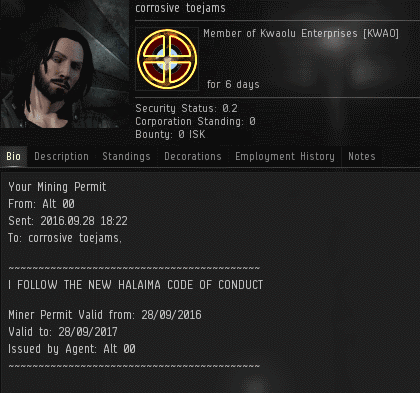 Just one day earlier, corrosive toejams had joined hunter19741 in mocking the Code. Had he followed his fellow miner into Code-compliance as well?

Yes. corrosive had gotten into a private convo with Alt 00 and bought a bunch of permits, too.

Now it was Bebe's turn to face peer pressure.

The mining community was divided. Interestingly, the permit owners were all smiles and sunshine, while the rebels were angry and upset. It's almost as if buying a mining permit is fun!

Bebe couldn't stand the idea of obeying the Code. The very thought disgusted her, and she couldn't understand why so many other miners were buying into it.

One reason presented itself: The awesome combat experience of our Agents.

The highsec miner scoffed at Alt 00's war record--despite lacking elite PvP credentials of her own.

Bebe's stomach turned as she watched even more miners jumping aboard the New Order bandwagon.

It was time to wrap things up in the Nakugard ice anomaly. Alt 00 had dealt with nearly all of the ice miners. 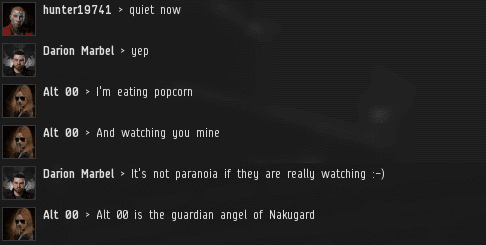 And so it was that Agent Alt 00 brought a moment of perfection to the Nakugard system. Peaceful, happy Nakugard. 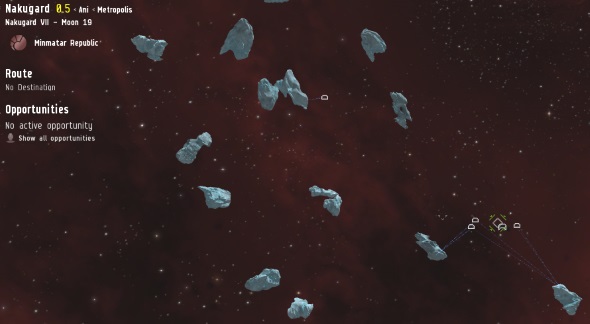 In time, all highsec will experience the bliss of total Code-compliance. Forever.
Posted by MinerBumping at 19:25