Gamis has a tight-knit community. Outsiders are welcome, but they're expected to play by the rules--and watched to ensure they do. If I am the Father of highsec, then Agent Kalorned is Gamis' Big Brother. He sees all. 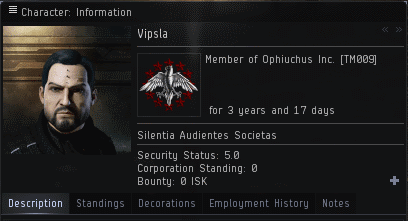 A fellow by the name of Vipsla brought a Skiff into the Gamis ice anomaly. He brought with him an alt in an Orca. Since Vipsla wasn't there by invitation, and since he came with no references, Kalorned performed a quick background check on him. 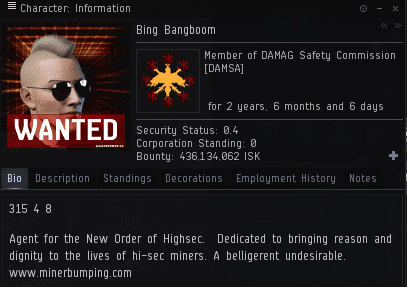 Kalorned noticed something strange about Vipsla's corp logo. He concluded, "Vipsla's corporation, Ophiuchus Inc., had infringed on a trademark by utilizing major aspects of DAMAG Safety Commission's logo as its own." Kalorned's instincts are finely honed. He immediately flagged Vipsla as a potential problem for Gamis.

Despite having an Orca alt present, Vipsla stored the ice he mined in a nearby open container. Kalorned helped himself to the ice and offered to sell Vipsla a mining permit.

The miner began speaking in Russian. A quick trip to Google Translate and Kalorned's instincts were confirmed yet again.

Vipsla had never even met Kalorned before, but he took a dislike to him for some reason. Kalorned repeatedly bumped Vipsla's Skiff out of the ice anomaly. But the miner returned and deposited more ice into an open container. Kalorned once again helped himself to the ice and pondered what to do next. Obviously Vipsla hadn't learned his lesson, so our Agent took things to the next level. 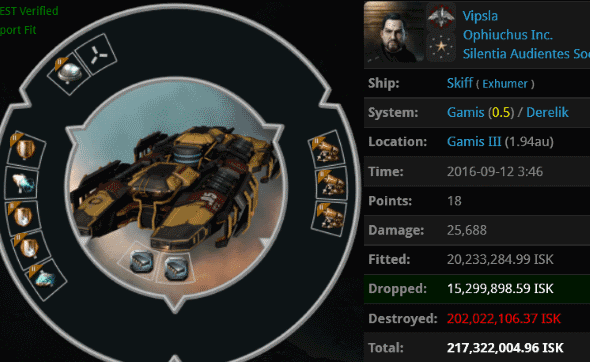 Kalorned had every reason to expect the miner would change his ways after witnessing the power of such elite PvP. But Vipsla proved to be incredibly stubborn.

Vipsla was a typical highsec carebear--the kind of person the Anti-Gankers refer to as one of "the good guys".

Of course, the rebels and skeptics would have us believe that Vipsla's was an appropriate, reasonable reaction to losing a Skiff. However, Kalorned wasn't interested in the twisted, perverse values of the anti-Order resistance. Kalorned's values came from the Code. And he wasn't about to let a vile ice thief drag him down.

A few hours later, Vipsla returned to Gamis with a new Skiff. Kalorned began bumping him, and Vipsla was forced to retreat.

The miner insisted he would never give up, though he'd given up mining at least for one day. Over the course of the next week, Kalorned and Vipsla fell into a daily routine. Kalorned would enter the system, and Vipsla would immediately exit the ice anomaly to take shelter in a POS.

The mere presence of Kalorned's name in local was enough to shut down Vipsla's mining operation for hours at a time, even if Kalorned was AFK. One might've expected that Vipsla would simply go to one of the other ice systems in highsec. As I said, though, Vipsla was stubborn. He decided he'd rather get ice from Gamis, even if it meant he had to spend most of the day idle and wait for Kalorned to log off before mining. For now, he was losing the battle with our Agent. But the miner promised to unveil a game-changing new strategy.