DamienNOFX was a dangerous man. Not because of his PvP skills, which were lacking, but because of what he represented. 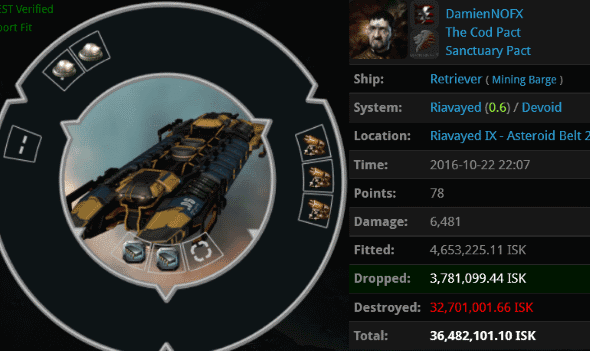 Then our hero entered the story: Agent Knackered Old Goat rode in on a Catalyst and shot DamienNOFX's ship to pieces. It was a smashing victory for the New Order. Elated by his success in battle, Knackered sent DamienNOFX a form EVEmail notifying him that he'd been terminated for AFK mining.

DamienNOFX invited Knackered to a private convo. He wanted to see the evidence of his being AFK, and boy did he get it.

The miner countered with one of the most absurd excuses our Agent had ever heard. It was beyond preposterous.

Agents of the New Order are outrageously professional. You wouldn't believe some of the stuff that gets thrown their way, but they handle it all with grace. And when DamienNOFX demanded to speak with a superior officer, Knackered wasn't defensive at all. None of that "Are you sure you want to escalate this petition?" business you might hear from a GM.

A couple minutes later, an impartial third party was called in. DamienNOFX was in good hands.

Agent Alt 00's polite manner immediately put DamienNOFX at ease. If anything, the miner was starting to get a bit overconfident.

...And then it all fell apart.

In the past, some members of CODE. have been accused of torture. That's not the way we do things. The New Order of Highsec doesn't torture. There are better methods of eliciting a confession from a miner, anyway. Our Agents simply engage in a little rapport-building--and before you know it, the miner's spilling his guts.

Miners love to say that they were ganked at the very moment they left their keyboards. Either our Agents have almost supernaturally good timing, or the miners are lying. Or both. Yeah, probably both.

Alt 00 referred the miner to the rules concerning bathroom usage while mining. Always a good link to have handy.

Now it was time for the ganker to offer his version of events. The story he told was heartbreaking.

DamienNOFX didn't like the way things were going. He did something nobody expected. He blew up the proceedings by posing a question that had not been asked before: What if someone went into labor while mining? Our Agents' commitment to the Code was put to the ultimate test.

To be continued...
Posted by MinerBumping at 16:11