The Code Is Your Shelter

Protip: Pay your taxes. Among the greatest dangers to those who lack a mining permit is the Gate Tax Collection Agency, a CODE. member corp. They've really ramped up the audits lately, inflicting a quarter trillion isk worth of damage this month. 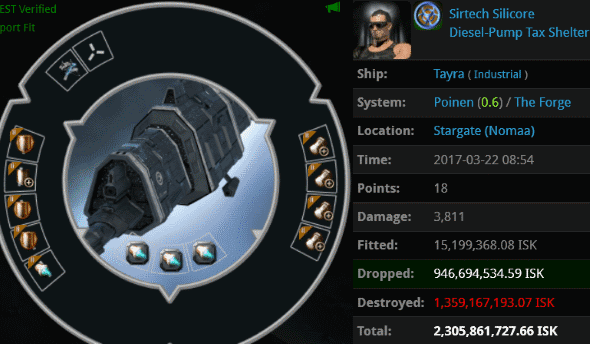 Sirtech Silicore of the Diesel-Pump Tax Shelter was in for the surprise of his life when he ran into Agents Tax Collector HongMei and Taxman Daniel. Our Agents determined that the miner owed them isk for back taxes and penalties. The result was the destruction of Sirtech's 2.3 billion isk Tayra.

Sirtech's Tayra was filled with drugs, as well as a bunch of blueprints. All of the cargo was contraband, since Sirtech didn't own a mining permit.

Agent Tax Collector KarlMarx offered the miner a "gf", but Sirtech wouldn't reciprocate. He had the entitled attitude typical of carebears: He bemoaned the loss of years of work, but didn't stop for a moment to consider that he was also years behind on permit payments.

Sirtech took out his anger on our Agents, but the anger should've been directed at himself. He was a criminal, and he knew it. It was only a matter of time before the taxman caught up with him.

It's not uncommon for carebears to threaten to quit EVE after they lose a ship. But Sirtech hinted that he'd already hated the game even before he lost his ship.

Our Agent's good advice was ignored as Sirtech vented his anger. The miner seemed to think that being nasty enough in chat would get him permabanned by CCP. Sirtech had a lot to learn.

For the first time, our Agent realized the miner was serious about wanting to quit. Miners usually jump at the chance to get reimbursement isk.

Sirtech confirmed what he'd suggested earlier: He hated everything about EVE, not just the PvP.

The miner fully understood that EVE is a sandbox--and that's precisely what he hated about it. He didn't want to experience emergent content.

Sirtech was done with EVE forever. And it wasn't enough to uninstall the game; he might be tempted to return later. He needed to be permabanned to ensure that he would never play EVE again.

The stingy carebear wouldn't part with the rest of his property. Even if his drug stash constituted most of his assets, he must've had a least some liquid isk. Unfortunately, Sirtech would take that money to his EVE grave.

Here we see the limitations of the "free to play" model. It may bring people into the game, but they can just as easily leave. They need a reason to keep playing--like the Code, for instance.

EVE University, too, has its limitations. The Code provides the answer there, as well.

At last, in Sirtech's final moments, he congratulated our Agent on his PvP victory. Sirtech had potential. In fact, I choose to believe that every EVE player has the potential for greatness. But Sirtech wasted his EVE life on drugs. And the most deadly drug of them all is bot-aspirancy. What a shame.
Posted by MinerBumping at 14:59