When expensive freighters die, two questions inevitably arise: First, where was Anti-Ganking? And second, how can Anti-Gankers be so bad at preventing freighter ganks? Unlike miner ganking, which can theoretically occur anywhere in highsec at any time, freighter ganks are highly predictable. A targeted freighter often gets bumped for 30 minutes or longer, telegraphing the impending gank to an absurd degree. Under these conditions, EVE's game mechanics--faction police, CONCORD, jamming and remote reps--would strongly favor a group of even mildly competent anti-gankers.

...However, Anti-Ganking isn't known for its competence. No one ever accused them of being a well-oiled machine. Today, we'll take you inside the Anti-Ganking channel to document an actual case of Anti-Gankers showing up to a gank and trying to stop it. We don't need to ask the question, "Where was Anti-Ganking?" The second question, on the other hand, will be very much in play.


nate dogg > looks like a trap 2 kill me lol this channel shady lol
XiaoMi Kurosaki > can out
Alexander Kaan > at least until the bumping gets it too far again
Erich Einstein > ganks already have plenty of members to warp in too. The can is so AG can get to you easier
nate dogg > sry im unsure wot 2 do lol
nate dogg > im in a t3 cruisers i cant replace.....

Anti-Gankers were alerted to a "bump in progress" in the Perimeter system. As usual, the rebels were disorganized and distrustful of one another.

A freighter piloted by Banjo Snapper found itself repeatedly bumped by a Machariel. He urgently requested help from the Anti-Ganking channel. Since the bumping went on for a long time, there was ample opportunity for help to arrive. A small fleet of rebels gathered in Perimeter to save the freighter.

At first, Banjo had been relieved to see so many would-be rescuers flocking to the scene. But as time went on, Banjo grew increasingly alarmed. Did these Anti-Gankers know what they were doing?

Minutes ticked by and Banjo was no closer to escaping the Machariel bumps than before. The freighter pilot's pleas for help grew desperate.


Steamjunk > do we know what the freighter is carrying?
Banjo Snapper > do we have rrigs on grid?
Banjo Snapper > *frigates?
Erich Einstein > I have a 500 dps cat on grid
Alexander Kaan > probably won't save you but it's worth trying

Banjo watched the Anti-Gankers in disbelief. Why were they bringing frigates? Anti-Gankers don't need to worry about being CONCORDed. There was no risk. Banjo couldn't believe that the rescue team wasn't armed with more powerful ships.

To prevent Banjo from simply logging off to escape the Machariel bumps, one of the gankers sent a rookie ship to aggress Banjo's freighter. It's a common tactic that's been around for many years, yet it caused some confusion among the Anti-Gankers.


Steamjunk > try having him set speed to zero, do not try to warp or align
Steamjunk > when i bump into freighters doing that on the jita undock, they dont go far, its a weirdness of eve physics
Alexander Kaan > gank fleet on grid
Alexander Kaan > get away from zero unless you want to die
Steamjunk > lot of talos, he must be carrying a ton

At last, the moment arrived. A massive gank fleet with 18 Taloses came out of warp next to the freighter. Time for the Anti-Gankers to work their magic!


Erich Einstein > sorry man, you dont have enough support
Alexander Kaan > I told him what to do but he insists webbing himself
Alexander Kaan > instead of doing osmething more useful with his alt
Maximilien Robespierre Patrouette > You can't fix stupid Alex. 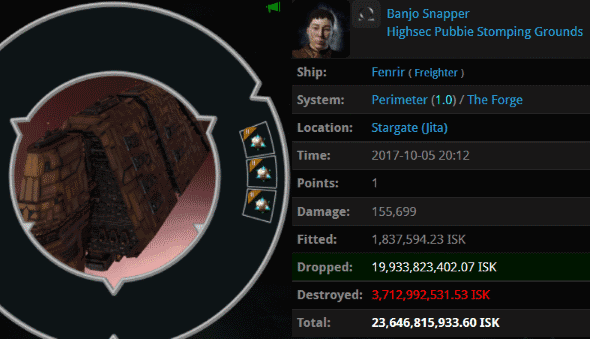 Banjo, who belonged to the ironically named Highsec Pubbie Stomping Grounds corp, lost his 23.6 billion isk freighter. As he contemplated moving forward in EVE without his stuff, Banjo looked at the Anti-Ganking chat and snapped.

Like all other carebears in his situation, Banjo had to face reality and see the Anti-Gankers for what they really were. He let them have it.

As usual, the rebels made each other miserable. Anti-Ganking was as toxic as ever.

Suddenly, the argument was interrupted by additional combat occurring on the grid. One Anti-Ganker started shooting another by mistake.

The only rational course of action for both freighter and Anti-Ganker alike: Embrace the Code. Otherwise, they must be condemned to an eternity of nothing but failure.
Posted by MinerBumping at 18:10