'Twas another fine day in the Uedama system. How do we know 'twas fine? 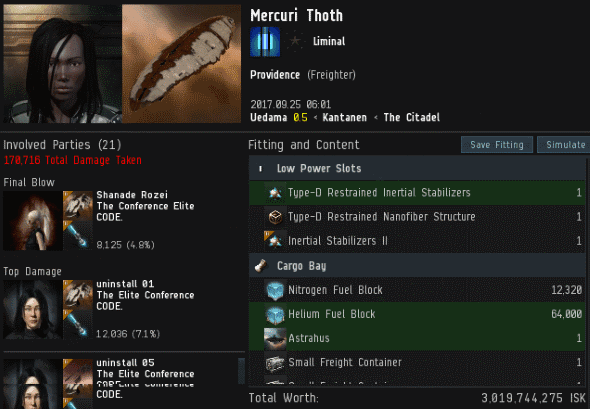 Because freighters were dying.

Mercuri Thoth tried to pull a fast one by sneaking her unlicensed freighter into highsec. The result was predictable: She was caught by bumper Berry Nice. Though the gank was a team effort, most of Mercuri's anger was focused on Agent Berry. 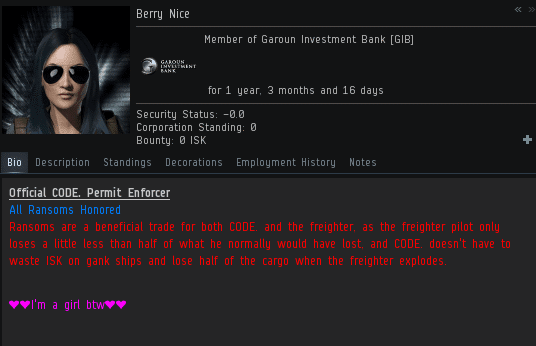 Agent Berry Nice is a freighter bumping specialist. She's earned a reputation for honesty and fairness. She's also known for breaking boundaries; she's proven she can bump freighters as well as any man.

Berry was AFK at the moment. Agent Trump The King stepped in to defend her. This wasn't merely a case of "white knighting". Trump didn't want to see a good Agent's name get slandered in local.

Before long, Mercuri was on her heels. She'd assumed that she'd be able to take the moral high ground. But that's pretty tough to do when you're arguing with an incorruptible Agent of the New Order.

Mercuri tried to appeal to Agent Trump's loyalty to his family. What the freighter pilot didn't realize is that the New Order is itself a family. Trump's fellow gankers were his brother and sister and mother.

Mercuri obviously hadn't expected to lose an argument with the people who had ganked her. She began to push the conversation in an uncomfortable direction.

The carebear demanded to know the real name of the bumper who had delivered him to justice. Judging by the context, Mercuri's intentions may have been sinister. 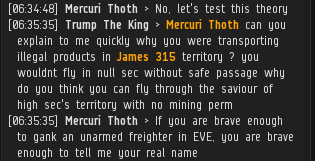 Agent Trump tried to do the freighter pilot a solid by changing the subject. However, Mercuri couldn't be diverted from her course, no matter how dangerous it was. Just what you'd expect from an autopiloter.

Trump feared the possibility that Mercuri might tread into EULA-violating territory. Clearly, Uedama local was not an appropriate venue for this conversation.

Our hero had no desire to see Mercuri get banned. She owed him at least 10 million isk, after all.