Previously, on MinerBumping... Agent Bob the Fourth had become a highly respected Agent of the New Order in the Solitude region. Any rational miner could see that it made sense to buy mining permits from him. But as the effects of mining all day took their toll on LeXXi Gel, he was no longer capable of rational thought.

LeXXi's Russian translator was effective enough to get the miner's point across: He was too greedy to pay what he owed Bob. 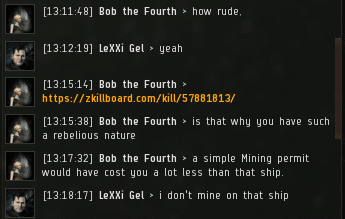 Bob ran a background check on the miner and discovered that he'd previously been ganked by Agents Ralliana and Luna Nightblood, costing him a 785 million isk Orthrus. LeXXi was still sore about it.

Just as our Agent was making progress with LeXXi, their conversation was rudely interrupted by Netsuna, another miner apparently using a translator of some sort.

Bob moved quickly, placing the customary 315,315 isk bounty on Netsuna's head. Hopefully this would have a pacifying effect on the new miner. 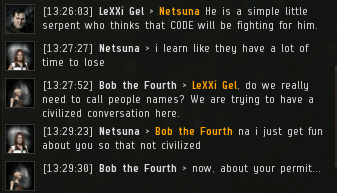 Unfortunately, the two bot-aspirants reinforced each others' worst instincts. Bob would need to return to them later. In the interim, he would move on and find miners more receptive to the Code.

One of the many favors Bob did for the Solitude region was to collect drones from miners. Sometimes the drones were abandoned. Other times, the drones were still in use by the miners. Bob had developed a special method for taking the drones away.

Bob made the acquaintance of SARA ROTOR, a miner whose drones he had taken on a few prior occasions. SARA came to know Bob well.

Like so many other miners in Solitude, SARA was a Russian. She knew just enough English to get by.

After losing one too many drones, SARA declared herself Bob's mortal enemy and threatened to discover Bob's hypothetical secret identity.

Like all of our Agents, Bob is as transparent as can be. He doesn't need a secret identity. Unlike the miners with alleged nullsec mains, Code enforcers aren't ashamed of what they do.

Later, Bob returned to the ice anomaly and found one of SARA's alts. But on this day, Bob was going to get much more than he bargained for. 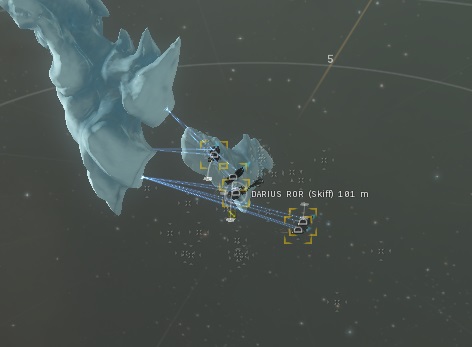 Without warning, a group of five Skiffs suddenly began targeting him. It was an ambush!