Of Profiles and Courage

People say you shouldn't judge a book by its cover. But can it really be true that there's nothing to be learned from covers? Or in EVE's case, character profiles? 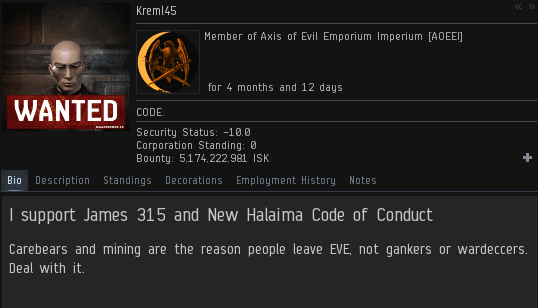 Consider this profile. Kreml45 is a member of the mighty CODE. alliance. His bio proclaims support for the Code and for the Saviour of Highsec. Solid. 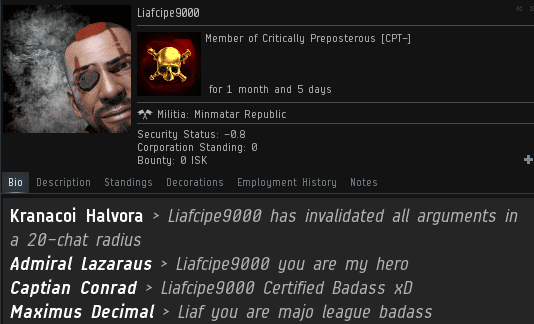 And here we have Liafcipe9000. His bio doesn't spare even a single line about the Code--but it does devote an awful lot of space to trying to convince people he's a "badass".

By chance, Kreml45 happened to be in the system. Our Agent was genuinely curious as to why Liafcipe9000 was so sensitive to mentions of the CODE. alliance, especially since the fellow was engaged in highsec PvP. Kreml45 wondered if perhaps Liafcipe9000's highsec PvE alt had been ganked by a member of CODE.

It was as Kreml45 suspected. Liafcipe9000 was a closet miner.

As the miner continued ranting in local, he accused our Agent of being salty; apparently he was blinded by all the salt in his own eyes. The miner became so obnoxious that he managed to alienate random passersby who might otherwise be receptive to an anti-Code message.

Kreml45 commented upon the miner's confusion. This innocent observation caused Liafcipe9000 to lash out in anger.

As is usually the case in these situations, a bit of calm was just what the miner needed. However, Liafcipe9000 was far too wrapped up in his own ego to consider it. Feeling backed into a corner, he seemed ready to execute the "powerful alt in nullsec" defense.

Another passerby noticed the commotion in local and wondered what was wrong. Liafcipe9000 offered his own perspective, which happened to be the exact opposite of reality. Yes, he was definitely a highsec miner at heart.

What's the takeaway here? Pay attention to character profiles. To the trained eye, they offer invaluable insights.
Posted by MinerBumping at 16:03