How AFK must a miner be in order to lose his pod in highsec? 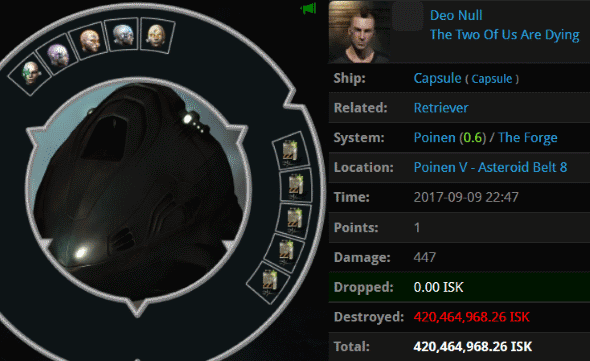 Pretty AFK. Deo Null lost his Retriever and a 420 million isk pod while AFK. Deo Null wasn't very appropriately named; he might've chosen the name Deo Highsec, had he known he would become a carebear. (His corp name was more fitting, though.)

Agent Larsulrik Napsterbane contacted Deo after the gank to give him some valuable information about the Code--only to learn that Deo was one of those "I would've paid" guys.

Nevertheless, Deo knew a good deal when he saw one, so he requested additional details about how to buy a permit. Still, he had nagging doubts. He didn't yet have full faith. 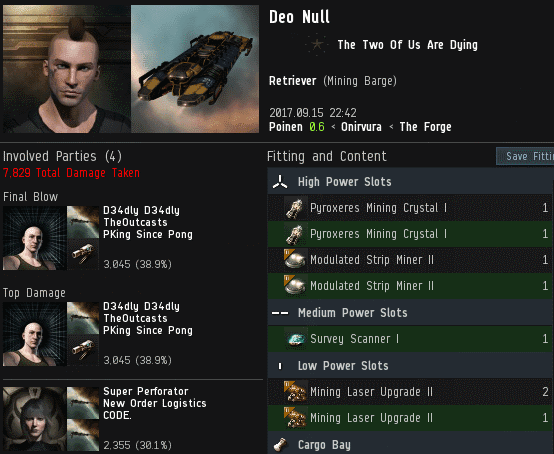 On the other hand, "day" might be pushing it. Deo enjoyed less than an hour of gank-free mining before he was terminated for non-compliance. 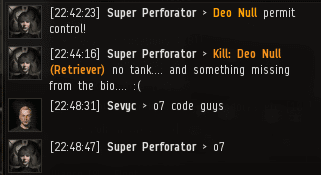 He'd gotten plenty of warning, of course. But Deo didn't equip his mining permit or any tank modules. In fact, he looked for all the world like a bot-aspirant who didn't own a permit.

Deo invited Agent Super Perforator to a private convo and presented his permit to prove he'd purchased one. Agent Super was patient with the miner, but Deo's true colors were already beginning to show. He had to be told to calm down--an instruction that Gallant miners almost never require.

No wonder Deo wasn't "very social"; every time he opened his mouth, more evidence of his guilt poured out. Side note: I've never understood the carebears who say they only want to be left in peace. When the Money Badger Coalition invaded Imperium space last year, could they have been driven out by the Goons saying, "leave us alone"?

With only the slightest of nudges, our Agent coaxed Deo Null into making an even more thorough--and more damning--confession. 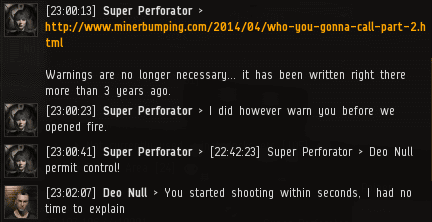 Super Perforator had made up her mind. Deo Null didn't qualify for reimbursement. In fact, the only question was whether his permit would be revoked.

The miner had bound himself in a web of lies and excuses. Gallant miners don't need to come up with detailed explanations about why they failed to obey the Code. They simply obey the Code. It's so simple.

If for whatever reason you want to mine in highsec, the first thing you need to do--before learning about skills to train or modules to fit or ships to buy or asteroids to find--the very first thing, is read the Code. It's remarkable just how many miners skip this all-important step. 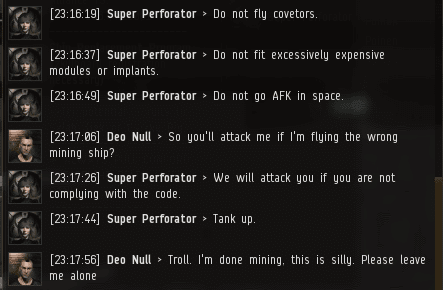 Our Agent offered the miner one-on-one tutoring in the Code, but Deo Null wasn't interested. He opted instead for the "leave me alone" tank. Super Perforator had no choice but to revoke his permit. Now Deo Null is on his own, without the New Order family to protect him from himself.
Posted by MinerBumping at 18:02