Previously, on MinerBumping... The ice anomaly turned hot: Agent Bob the Fourth was threatened by a Russian mining fleet operating in the Solitude region. The Russian running the fleet warned Bob that he'd discover the identity of Bob's main character. But before long, it was Bob himself who was in their crosshairs.

The Russian fleet, led by DARIUS ROR, consisted of Skiffs. And boy did they look menacing.

However, Bob is an Agent of the New Order. That means he doesn't back down from a fight. Our Agents rise to meet any challenge, no matter how much the odds are stacked against them.

For the moment, at least, DARIUS was unwilling to give the order for his Skiffs to open fire. Instead, he beat his chest in local. At least, I assume he was beating his chest. I mean, he was speaking Russian.

Bob's Russian was a little rusty, so he decided to speak in highsec's universal language: the Code. 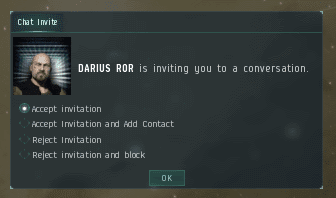 That got a reaction. Bob hoped that this was a sign of progress, though convo invites from miners always look a bit ominous. 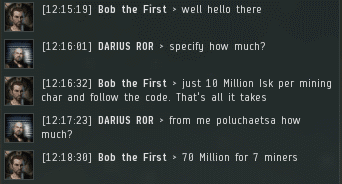 DARIUS was now speaking English (mostly). Bob started feeling more confident. Now that he was talking about isk, he was sure to have the miner's full attention.

Suddenly the Russian appeared to be comfortable paying for mining rights. The true test, of course, was whether Bob got something sent to his wallet or not.

Bob shared the glad tidings with everyone in local. Maybe now that the ice had been broken--so to speak--the other locals would be interested in buying permits. 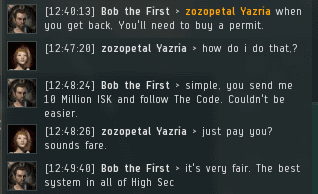 Minutes later, Bob bumped zozopetal Yazria out of the ice anomaly. When she returned to her keyboard, she found her Retriever sitting outside of mining range with its ice harvesters deactivated. Now she, too, was interested in buying a permit. 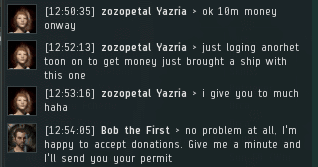 In less than an hour, Bob had made nearly 100 million isk selling mining permits. Had the Solitude region finally begun to see the light?

To be continued...
Posted by MinerBumping at 17:36