Previously, on MinerBumping... Madness... Madness. Mission Ready Mining's world was turned upside down. Despite being EVE's sixth-largest corp, MRM's Gelhan operations were at the mercy of a single bumper, Agent Georgia B Dixie. The siege of Gelhan had gone on for weeks. The new normal was intolerable. 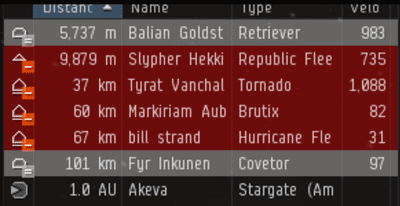 A pair of miners tried to get in some mining time, only to find themselves bumped by Georgia's Machariel. The MRM "defense" fleet stood by and watched. They didn't dare open fire. 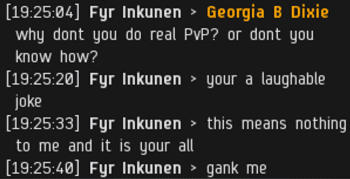 Under these conditions, miners begged to be put out of their misery. After a prolonged period of bumping, miners think of being ganked as a mercy.

(Note: Several of these screenshots are too wide to fit on the page, so you'll need to click them to read the text.)

An hour later, Gai Heiyuu, the CEO of Mission Ready Mining, returned to Gelhan. He gave a speech in local, explaining that the New Order was untouchable due to its use of unfair game mechanics.

The CEO gave his own take on the New Order's philosophy. He was occasionally interrupted by salty miners like Patrick Bick, who lacked Gai's superficial civility.

Suddenly, Gai hinted that perhaps the New Order's goals weren't so incompatible with Mission Ready Mining's after all. An absurd notion--one surely driven by Gai's eagerness to make peace with a superior opponent.

Agent Georgia rejected the peace feelers out of hand. She'd known plenty of people like Gai: miners claiming to be in favor of "some" highsec risk and offering lip service against bots.

Georgia stood for the Code--no compromises. Gai switched to another tack. He questioned the New Order's commitment to its own Code.

Gai demanded to know why the New Order had launched an assault against Gelhan. Amusingly, he complained that there were "so many New Order pilots" in Gelhan--despite there usually being only one.

MRM's CEO finally admitted that he was very aware of what had been going on in Gelhan. This was quite a contrast with the attitude he expressed earlier: 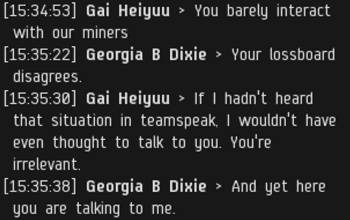 When he first showed up, Gai had tried to brush off the New Order and its impact. Georgia wasn't fooled. This, too, was a strategy she'd seen many times before.

Sensing that Georgia was absolutely committed to the Code, Gai focused on challenging Georgia's interpretation of it. The CEO of EVE's sixth-largest corp was now engaged in a debate about the Code with an Agent of the New Order. Cultural victory?

It was clear that Gai needed to spend more time studying the Code. He made all sorts of outrageous claims. He codesplained that miners only need a permit for AFK mining(!) and told Georgia she was wrong when she corrected him.

Then Gai made his most shocking assertion yet.