Highsec miners aren't known for their traditional family values. Luckily, highsec has the Agents of the New Order to provide a better example. Welcome to the latest edition of the Highsec Miner Grab Bag! 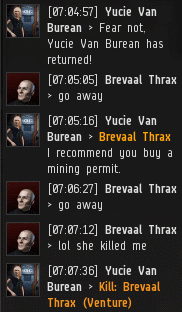 I've cautioned miners that a "leave me alone" tank is ineffective. But it's usually easier to kill a miner than to reason with him. 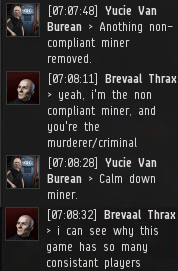 Miners like to blame the mighty CODE. alliance for the decline in EVE subscribers. In reality, EVE would have even fewer players if not for CODE. and all the content it creates. This has been scientifically demonstrated time and time again. 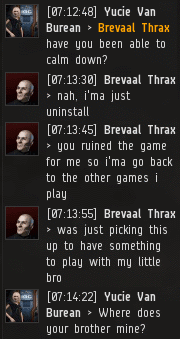 That having been said, some of the very, very worst EVE players might leave the game when ganked. However, the loss is more than made up for by all of the new players that the Code attracts and retains.

When you get an EVEmail like this, it makes you want to learn more about the person who wrote it. Here's the description of Zna4Ok's corp: 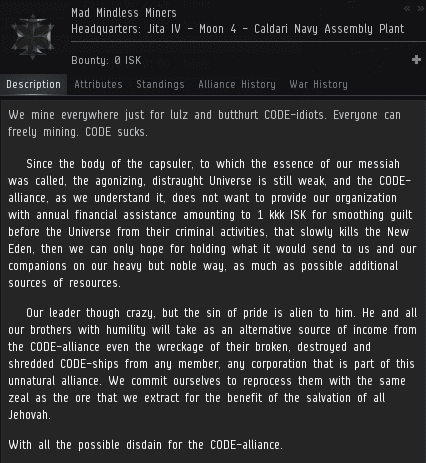 Unfortunately, it raises more questions than answers. Yes, it's the Mad Mindless Miners corp, but how did they get that way? One can only assume that this is the effect of too many hours of mining in highsec. 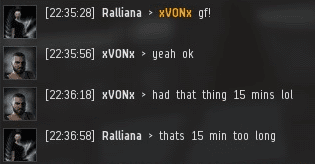 You know all those anonymous commenters who say, "I've been mining without a permit for years, and CODE.'s never ganked me"? Sure.

It sounds like your weapons platform still needs some work.

Fifteen minutes, ten minutes... Even an anti-Code rebel should be able to appreciate our efficiency, at least.

Another common carebear contradiction: They say that EVE wouldn't have any ships if not for the work of Code-violating miners. But they also say that they can go to nullsec and mine whenever they want. So which is it? 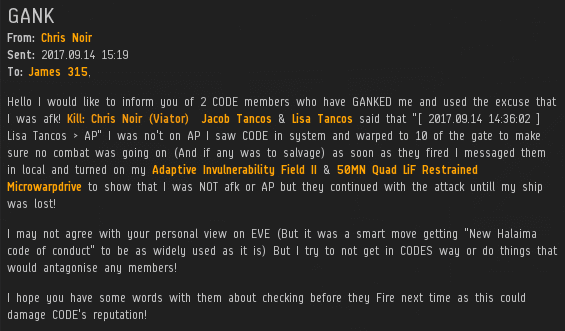 Damage CODE.'s reputation? I think our reputation's too good to be damaged that easily.

If you want to make an Anti-Ganker cry, show him this. Our relevance grows each day. No one can deny it, not even the ISD!
Posted by MinerBumping at 19:35