"You're just a bunch of griefers and bullies," say the rebels. A baseless charge. If our Agents were really so insensitive to the feelings of the miners, why do they stop and offer to help whenever they see a gank?

Andrey Polykhaev suffered a devastating loss when Agents Alt 00 and Alt Proxy destroyed his pride and joy. Agent Yucie Van Burean witnessed the event. Fearing that Andrey might have difficulty recovering from such a big loss, Yucie reached out to the miner.

Our Agent taught the miner some Code basics and offered to sell him a mining permit. So far, Andrey seemed receptive to the idea. He didn't want to lose another expensive ship.

Yucie was impressed by how polite and compliant the miner was. It looked like Andrey would be her easiest permit sale yet.

Then the conversation hit an unexpected speed bump.

It's unclear why Andrey's personality and demeanor changed so suddenly. Whatever the reason, Yucie now felt considerably less confident about selling a permit to Andrey.

Andrey exploded with rage. It was shocking to think that this was the same mild-mannered miner from the beginning of the conversation. It was as if Andrey had been on some sort of time-delay fuse or something.

The miner issued a jaw-dropping ultimatum: Either Yucie reimbursed Andrey's loss, or she would contract a fatal form of cancer. Our Agent had a difficult choice to make. Where did Andrey get this kind of power?

Yucie noticed to her disappointment that Andrey wasn't calming down. His fulminations grew increasingly violent. At this rate, the miner might end up breaking the EULA.

As the inferno blazed, Agent Yucie refused to be intimidated. Andrey might wield the deadly power of cancer, but she had something even better: The Code.

At this point, it might be worth it to see what exactly Andrey lost to make him this angry. 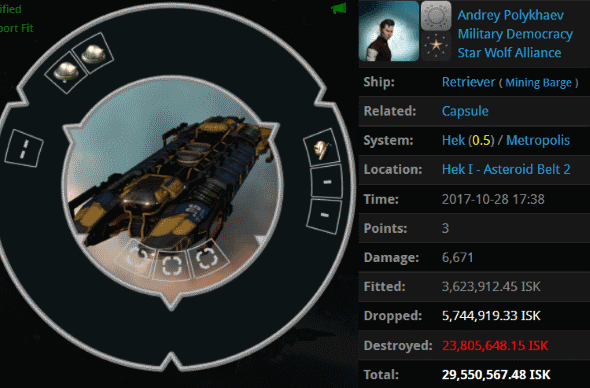 To the surprise of no one, it was a Retriever. Andrey's Retriever was particularly fail-fit, and he was using it to mine in one of the Hek asteroid belts. In fact, making real-life death threats was probably the smartest thing he'd done all day.

If you step back and look at this situation and see Andrey Polykhaev as the hero, you'd probably fit right in with the Anti-Gankers.

Yucie wasn't able to give Andrey much help that day. He still needed a mining permit, but at least someone had told him about the Code. Who knows? Maybe Andrey could end up being a nice, pleasant, permit-carrying miner someday. But I suspect it will take a long time to get there. Andrey's journey will be a difficult one, I think.
Posted by MinerBumping at 18:04