Previously, on MinerBumping... When Mercuri Thoth lost her freighter to a righteous gank, she raged against Berry Nice, the Agent who had bump-tackled her. Agent Trump The King offered his services as a neutral mediator. But Mercuri flew out of control, demanding real-life information about our Agents and making thinly veiled threats against them.

Agent Trump had invited Mercuri to participate in a relaxing, informal conference on TeamSpeak. Mercuri went silent. Ultimately, she chose not to join the TeamSpeak server, preferring instead to hash things out in the private convo.

Agents Trump and Berry quickly grasped that Mercuri had entirely the wrong idea about the New Order. Mercuri thought of them as the villains of highsec, when in fact they're the heroes. It was time to remedy this.

Unfortunately, Trump's attempt to explain by analogy didn't work because Mercuri wasn't familiar enough with the story of Robin Hood--or perhaps she was too familiar with it. Either way, our Agents would need to find another way of helping Mercuri see the light.

As the conversation progressed, Trump and Berry were encouraged by the calming effect they were having on Mercuri; she was no longer threatening to take the argument out of game. This was real progress. 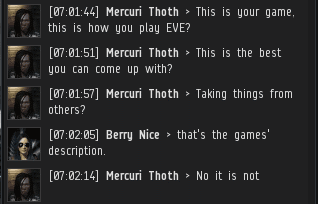 Although Mercuri was doing a better job keeping herself under control, Agent Berry noticed flashes of anger in the carebear's words. Berry suspected that there could be a reservoir of bot-aspirant rage simmering just beneath the surface. 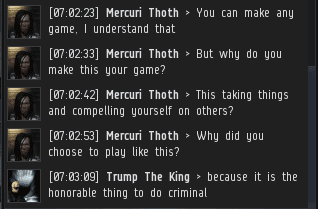 For some reason, Mercuri kept trying to claim the moral high ground. She was awfully self-righteous for an unlicensed freighter pilot. You'd think she was in the business of feeding starving orphans or something, rather than AFK autopiloting trash through Uedama.

Mercuri could no longer conceal her disdain for EVE's greatest PvP'ers. Was she one of those "Ganking Is Bullying" types?

Agent Berry was disappointed in the carebear. There was little she could do for someone who felt so entitled to a gank-free EVE experience.

Mercuri was indeed of the philosophy that only a sociopath could enforce the Code. In her mind, well-adjusted players sign up for EVE so they can slowly grind isk AFK in perfect safety. She couldn't imagine someone playing a spaceship-shooting game for the purpose of shooting spaceships.

Like so many other people who fail at EVE, Mercuri fancied herself morally superior in order to justify her failures. "I lost my freighter, but only because I'm not evil like you people."

To prove her point, Mercuri treated our Agents to a lecture about the psychology of Nazism. The prospects of selling a mining permit to this carebear were growing dim. But the Agents of the New Order are not in the business of giving up.