When You Gank a Butterfly-Venture

Highsec miners are like a box of chocolates. You never really know what's inside until you tear the box open. 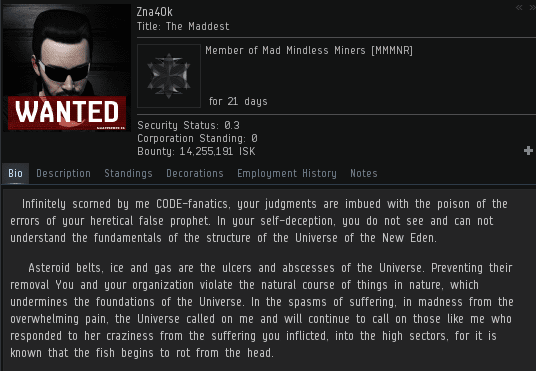 Ever since Agent Mack Poddington destroyed Zna4Ok's Venture, the poor miner has held a grudge against the mighty CODE. alliance. Zna4Ok formed Mad Mindless Miners corp as part of some kind of revenge plot. This led to his being featured in Highsec Miner Grab Bag #142.

Agent Yucie Van Burean heard through the grapevine that Zna4Ok lost another ship. It looked like the perfect opportunity to sell him a mining permit.

In spite of his difficulties in EVE thus far, Zna4Ok insisted that he didn't need the Code because he had a code of his own.

As is his wont, Zna4Ok worked himself up into a strange rant. Yet, for some reason, the miner felt he'd made a connection with Agent Yucie. Unlike most people in EVE, Yucie hadn't ignored the lowly miner. And so, when Zna4Ok needed help, Yucie was the one he turned to.

You see, Zna4Ok's bio ends with a link to the miner's own "code". Well, a rough draft of it anyway.

Greetings again.
If you have a couple of minutes of free time, I would like you to read this text, Noobs from Noob. The azes and basics. and also made an assessment of grammar, writing, content and usefulness for beginning players. If you want, you can write me notes and remarks to correct my mistakes and inaccuracies. Since our views on the actions of the players of CODE-alliance are likely to be little in what will be similar, then you can ignore the last paragraphs without comment.

Thanks in advance,
Zn4Ok,
The Maddest and Modest
of Mad Mindless Miners.

If you've got a manifesto and need a place to park it, the internet has a lot of options. You can write a blog, post it on a message board, or even upload it to Pastebin. Zna4Ok chose to use an Imgur album instead. Why? Because the format of his manifesto is a series of very low-quality image files.

The miner believed that his essay urgently needed to be improved. Lots of newbies rely on it, after all.

Zna4Ok's guide to EVE is fairly lengthy and contains some good advice. He encourages newbies to accept responsibility for their mistakes, rather than going into a blubbering rage each time they lose a ship.

Zna4Ok, who has been ganked while autopiloting himself, discourages newbies from using the feature--both because you can avoid ganks and because turtles.

Unfortunately, the miner goes completely off the rails as he transitions into the final third of his piece, which addresses the Code.

Actually, that's a good point about the Caribbean Sea.

Anyway, Zna4Ok is one of those "the Code was a good idea but then its supporters took things too far" types. I'm not entirely sure, but I think he calls our Agents monkeys.

Clearly, this miner has a beef with our Agents. But it's worth pointing out that the only person Zna4Ok could go to for help with revising his manifesto was one of those "sick and not incomplete teenagers".

In the end, though, behind all of the weirdness, we see that Zna4Ok is nothing more than a typical carebear who's upset about losing his Venture. When ganked, the madness of the butterfly was released into the world.