Previously, on MinerBumping... Gelhan was under the absolute control of the New Order of Highsec. Miners from Mission Ready Mining struggled mightily to adjust to their new reality. They refused to accept the help of their friendly neighborhood Agents, thus ensuring their own misery.

As quickly as the idea of armed resistance entered their minds, the miners abandoned it. All they could do was complain.

Agent Georgia B Dixie stayed on-message. She knew it was only a matter of time before the miners surrendered to the Code and bought permits. 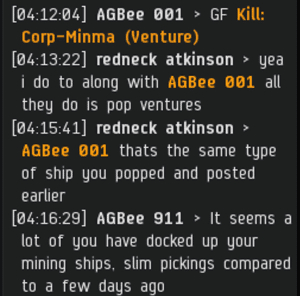 The miners wished for death, so our heroes sent them mercy in the form of the occasional suicide gank. 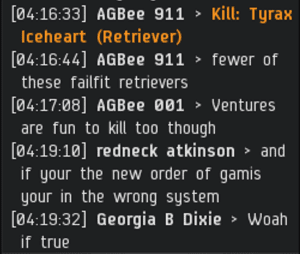 Nevertheless, nearly everyone in MRM remained docked up rather than risk a bump or a gank. It was a downward spiral: Without the ability to hide behind their fellow MRM members, it was even riskier to undock. All PvE activity ground to a halt.

(Click image for magnified view.)
MRM begged our Agents to leave the system. They cursed the name of James 315. They wished the Code had never come to highsec.

Our Agents continually reminded the miners how lucky they were that the Gelhan system had civilization and all of the benefits thereof. But MRM was full of anarchists.

redneck atkinson insisted that he would be better off on his own, without the New Order's help. It was a laughable claim, considering his bot-aspirancy.

Days went by. MRM's miners grew more accustomed to the sight of our Agents. As soon as they saw a bumper or ganker enter local, they docked up--fully aware that another day was about to be wasted.

Nobody in MRM was happy. They could see that what they were doing wasn't working. But instead of improving themselves, they blamed the New Order and its Code. All they could do was wait for some outside force to rescue them.

However, there was no outside force; the only force in highsec was the New Order itself. This was their EVE experience now.

Some rebels took comfort in myths and legends about the Saviour of Highsec being permabanned by CCP. They tried to ignore the truth staring them in the face: The spirit of James 315 was alive and well in every system in highsec. No one in EVE is less banned than I am.

Azaria Nardieu urged his fellow miners to abandon the Gelhan system. Yet those who did simply found more Code enforcers elsewhere.

The Code was victorious. The miners didn't want to admit it, but they didn't really need to. The evidence of victory was all around them: Bumping them, ganking them, forcing them to dock up, outarguing them in local...

Such was life and death in the Gelhan system.

To be continued...
Posted by MinerBumping at 19:33