From Toad to Prince, Part 1 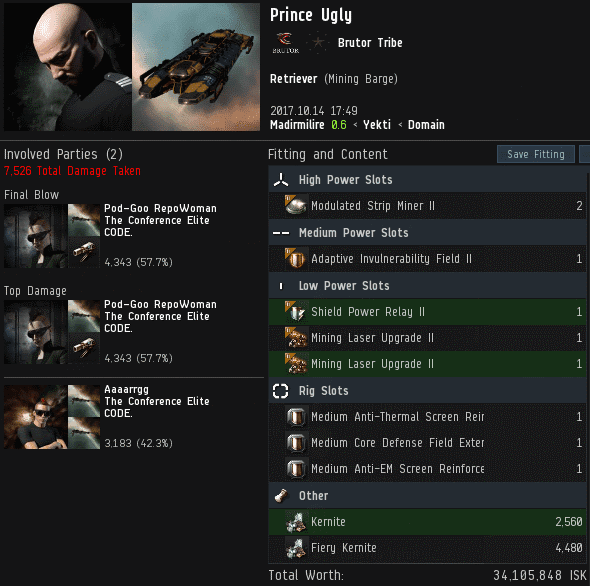 I don't think this got much coverage in the big EVE news sites, but the New Order won a key victory in the war against bot-aspirancy: An unlicensed Retriever was successfully ganked by our Agents. The miner's Kernite became especially fiery that day.

After what seemed like an eternity, Prince Ugly roused himself and tried to warn other carebears about that whole "miner ganking" thing that was going on.

Agent Aaaarrgg offered soothing words to console the miner, but he was rebuffed. Prince Ugly was the kind of miner who gnashes his teeth while claiming not to be angry.

With the assistance of a well-placed emoticon, Aaaarrgg engaged in some high-speed rapport building and got the miner to confess his guilt in no time at all. They make this look so much more difficult on TV.

Prince Ugly didn't care about his loss--but he despised those who killed him. At the same time, he despaired of doing anything about it. The miner was sliding into nihilism.

Just as Agent Aaaarrgg was getting ready to type a really persuasive argument into local chat, he was interrupted by yet another disaffected carebear.

Gias Octavian, a hauler pilot, was tired of trying to dodge gankers. He vowed to quit the game. (Studies show that he probably won't.)

Gias Octavian didn't give his stuff to Aaaarrgg, so our Agent's attention returned to the whiny miner. Prince Ugly was a hardened bot-aspirant. Convincing him to buy a permit would be a monumental task.

Our hero deployed the name of the Saviour of Highsec. Prince's resistance didn't soften, though. There would be no silver bullet solution today.

Aaaarrgg had no choice but to put in the work. He deftly parried the miner's argument. Now it was Aaaarrgg's turn to go on the offensive.

The true depth of Prince's bot-aspirancy was revealed: He had no intention of playing EVE "actively". He preferred video games where he could be inactive while working his RL job.

There was no doubt that if Prince could safely bot, he would. The odds of selling a mining permit to someone like this weren't good. Not good at all.

To be continued...
Posted by MinerBumping at 16:49