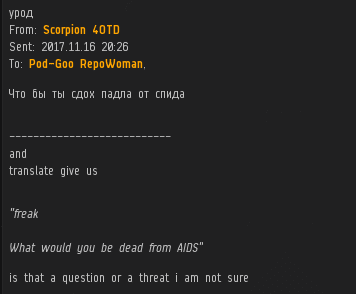 Ready for another edition of the Highsec Miner Grab Bag? Let's get to it, then.

Rust Hinken didn't just feed his cats... He fed some of our Cats, too. 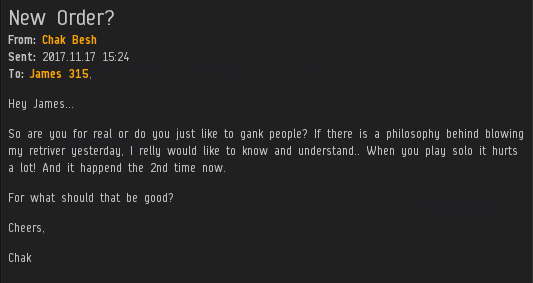 Chak Besh wanted to know if there was some sort of philosophy behind blowing up his Retriever. I believe this is what is known as a "softball question".

Our Agents are famous for their superb instincts. Agent Tax Collector Thnx4Loot took one look at Sawdeth Alumini and knew the guy was no good...

Sawdeth self-litmus'ed and went into not-a-miner mode. So far, the Tax Collector's snap judgment was holding up.

Carebears, there's no use in trying to hide from our Agents. With a single glance they can learn everything about you.

A lot of miners struggle with communication. What was Vornag Virtus trying to say? He needed to put more effort into writing his EVEmail.

You see that? Much better. Vornag could learn a thing or two from this guy. 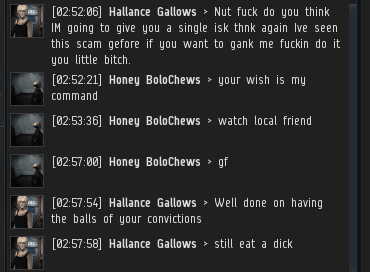 After a brief meltdown in local, Hallance Gallows lost her freighter. She probably regretted giving our Agents an invitation to gank her. Rebels, there's no ship you can fly that we can't kill.

You want my help in resolving the matter? It sounds like you already got resolved. XD

Khorgan Alastar's protest in a nutshell: Whenever he's not engaged in Code violations, his capacity for innocent enjoyment of highsec is just as great as any honest player's. An unconvincing argument, to say the least.

Every EVE player is looking to get something out of the game. Those who refuse to obey the Code never find it, though. (Unless their goal is to fail continuously nonstop daily all the time, that is.)

Mhanon Sart spent 10 years in the game but never played EVE until the Code arrived. Without us, what would be left? Only emptiness and regrets. Thank your local Agent today.
Posted by MinerBumping at 17:33