Previously, on MinerBumping... Mike Jinsu's Covetor was destroyed by Agent Bing Bangboom, who introduced the miner to the Code. Mike threatened to retaliate with the aid of powerful friends from an incursion fleet. Unfortunately, the only person who showed up was an acquaintance who'd just met Mike and wasn't willing to help him. 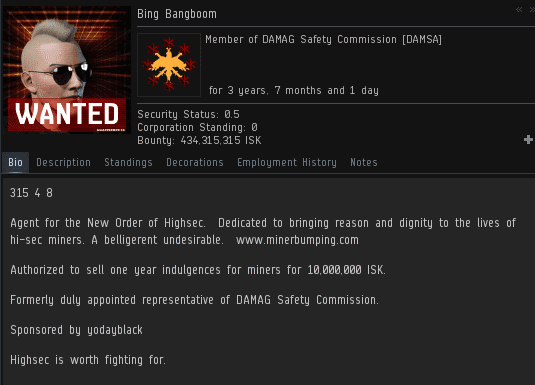 Now that Mike's army was out of the way, it was time for a one-on-one, man-to-man convo between Mike and Bing. If Bing had his way, the miner would embrace the Code and live a lifetime of joy and fulfillment.

...But Mike was a Goofus. He got in the way of his own happiness.

The litmus test never fails: At the very mention of my name, Mike could not help but reveal the true ugliness of his character.

Bing could only shake his head. Mike was digging a hole to bury himself in, and the miner wasn't even extracting any highsec ore for his trouble.

Just as witches struggle to recite the Lord's Prayer without making a mistake, Mike became utterly flustered by the name of the Saviour of Highsec. He couldn't even speak it.

Once again, Mike denied that he was a miner. And for whatever reason, he seemed to find his own mining ship lossmail to be completely unpersuasive--and it was a long-form, in-game lossmail at that.

"I'm not a miner, I was just experimenting." Who did this guy think he was kidding? There's probably Veldspar dust under his fingernails.

Mike insisted that he wasn't really a miner unless he mined full time. By that definition, I suppose Mike was a part-time miner and a full-time whiner.


Mike Jinsu > That's my business model for you
Mike Jinsu > Not James 215
Mike Jinsu > He's probably a drunk pedophile
Bing Bangboom > Look, you promised me that your friends would come and that you would duel... that's why I came.
Mike Jinsu > I gotta go

Our Agent reminded Mike of his promise to engage in a duel. Suddenly, something came up and Mike had to go. What timing.

In spite of everything, Bing still cared deeply for the part-time miner. He hoped that Mike would read the Code as soon as he finished taking care of his emergency. 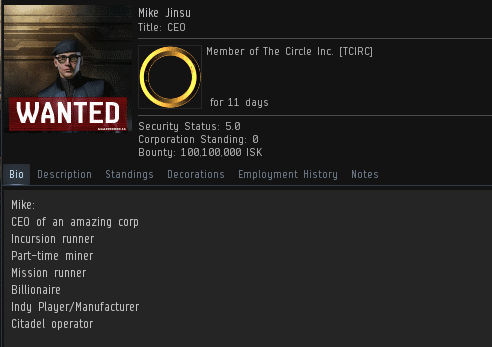 Mike's encounter with Bing changed him. He decided to reinvent himself by buying a pair of glasses and a beret and starting a new corporation. Mike knew he couldn't completely escape his miner status, so his new bio emphasized everything else he did. (Apparently all of his other activities were full-time.)

Now, I know what you're thinking, dear reader. "I bet his 'amazing corp' has only one member." So cynical! And you're wrong: Mike's corp has 5 members, including himself and alts. 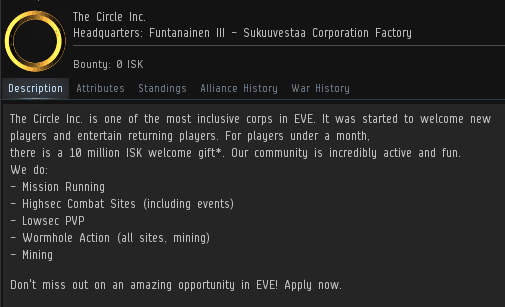 Intriguingly, Mike's corp offers a 10 million isk gift* to new players. Could it be that he wants to help them buy mining permits? We may never know. The asterisk doesn't correspond to anything.
Posted by MinerBumping at 16:41