Good sportsmanship: Some have it, some don't. 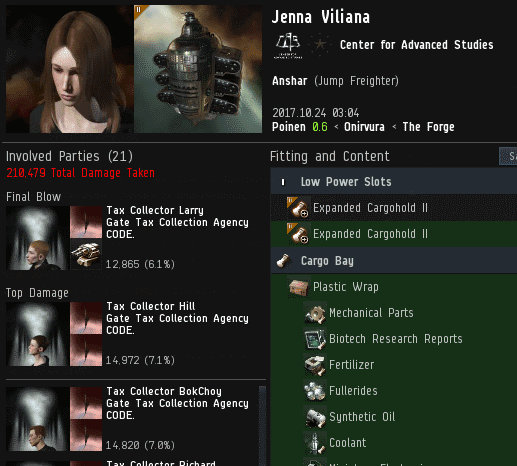 The Gate Tax Collection Agency popped a jump freighter worth 15.5 billion isk. In a breathtaking display of their power, the corp brought in 18 Tornadoes. By contrast, the jump freighter pilot, Jenna Viliana, didn't perform so well in combat. She choked, to be honest.

In Poinen local, Jenna tried to foment class warfare on behalf of the "working pilots" of highsec. Because autopiloting in a hauler is such hard work.

Jenna bristled at the suggestion that she'd been autopiloting. She claimed to be a hardworking manual warper. A real salt of the earth type.

How do we know whether Jenna had been autopiloting or not? Well, consider this: If Jenna was such a Code-compliant rule-follower, then why was she violating the Code by spewing profanity at our Agents in local? And why didn't she own a mining permit?

The carebear's tantrum in Poinen local chat began to attract some attention. Nobody believed she was innocent, but Jenna dug in her heels anyway.

Agent Australian Excellence wasn't afraid to let someone check his work. It's not for no reason that he has a spotless record. Agent Australian only kills people who deserve it.

Unlike regular freighters, jump freighters have the ability to teleport to safety at any time--even if they're being bumped by pro bumpers. Therefore, whenever a jump freighter is ganked in highsec, they're presumed to be AFK. The burden of proof was on Jenna to prove otherwise.

Jenna tried to convince our heroes that she'd been at her keyboard but unable to activate her jump drive. But in doing so, she accidentally confessed to another act of extreme negligence: Failing to keep a cyno escort on standby. This is a severe violation of the Code.

The carebear knew her goose was cooked. She'd admitted to breaking the Code in front of everyone in Poinen. She had virtually no chance of getting her 15.5 billion isk ship reimbursed. It's expensive to be a rebel these days.

After leaving the system in shame, Jenna felt she had to get in the last word. She accused Australian of violating the Code. Jenna's hypocrisy was almost as astonishing as her lossmail.

The carebear had one last card to play, though: She returned to Poinen and deployed some containers with a warning about the power of the mighty CODE. alliance. A thoughtful gesture. On the other hand, it's pretty hard to read those warnings when you're AFK.
Posted by MinerBumping at 16:39