The Evolution from Bot to Man


"The Blue Ice field which Ignebaener houses was visibly sick, with many bot and bot-aspirant pilots pillaging it. There were several Orcas, many fleets of Retrievers, and most sickeningly, an Obelisk. An ice field is no place for a large freighter, and this was the pinnacle of evidence that the pilots here needed to be instructed in the ways of the Code and James 315."

But who would act? Who would take a stand for the Code? 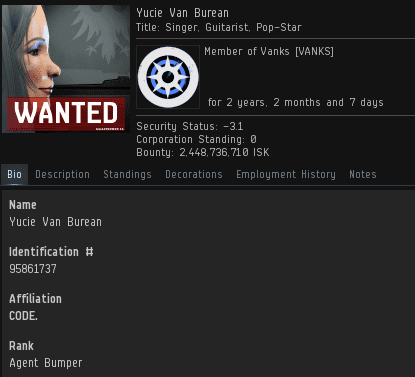 
"As soon as they saw me descend into the ice field, the Obelisk fled. Perhaps it was ready to embrace the Code. However, I had a job to do, so I set my mind to my work - and immediately began bumping the Orcas far from their scavenging Retrievers. In a very short time I was able to remove all of the fleets of bots and bot-aspirants, and the Blue Ice of Ignebaener was again able to shine brightly under the blue sun. A short while later one of the bot-aspirant pilots contacted me, Denins. He spoke Slovakian, but I was able to instruct him to use English..."

It appears that Denins was able to use a translator to speak with Agent Yucie. If anyone can send us a good Slovakian translation of the Code--or any other language we don't yet have--let us know. It turned out that Denins was an anarchist. He didn't understand that controlling the highsec miners is our business. 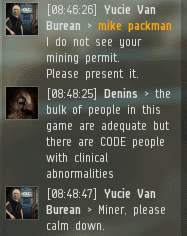 Unsurprisingly, Denins had been ganked by Goons several months earlier. Now he was dealing with a bumper. 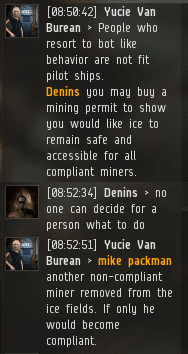 Like all miner bumpers, Yucie was good at multitasking. If one miner is stubborn and slow to accept the Code, another miner may be bumped in the meantime. 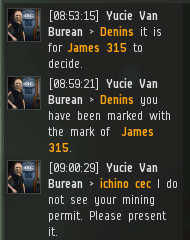 Since the beginning of the Code, gankers and bumpers have worked together. Gankers leave a more terrifying impression on the isk-obsessed carebears, while bumpers wield greater power in the moment. A single bumper can clear an entire system.

On the other hand, it can take a miner a while to "get" bumping. Denins was in disbelief that his ship could be disabled by another player without so much as a peep from CONCORD. Yucie bookmarked the miner by bountying him for 315,315 isk. Unlike carebears' impotent revenge bounties, our Agents' "mark of 315" method serves a useful function. 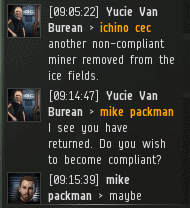 Agent Yucie continued to juggle the miners of Ignebaener. Bit by bit, the miners showed improvement. Even getting the silent miners to speak up in local is a positive development. 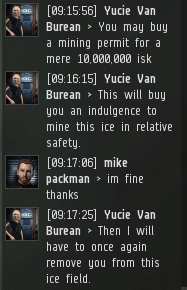 ...And if the miner struggles to understand what is happening to him, no matter. Bumpers have infinite ammo. 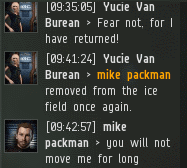 Some miners attempt to engage in a test of wills with a bumper, repeatedly returning to the ice field or asteroid belt. The miner always loses this contest. After all, highsec mining by its very definition requires very long periods of uninterrupted "work". A carebear who doesn't feel confident that his barge will still be in the belt after he returns from going AFK is a carebear who will soon quit mining. 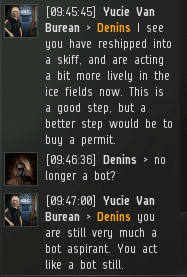 Denins tried to be better, but he didn't yet meet Yucie's standards. Nevertheless, the miner unambiguously sought our Agent's approval. That's a long journey from "I can do whatever I want."
Posted by MinerBumping at 18:00