The Talk of Highsec

There are casual gamers, and then there are lazy gamers. 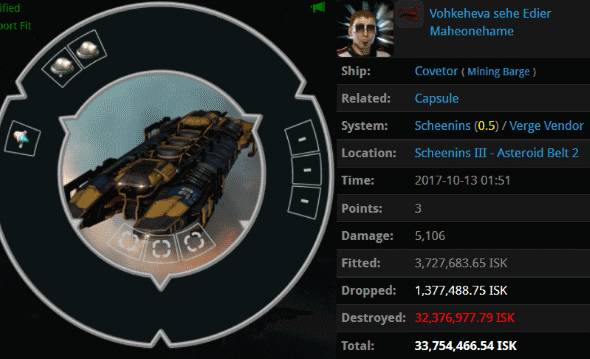 Being ganked inspired Vohkeheva to become more active than he'd been while his ship was still alive. He lit up Scheenins local with his protests.

"Huh?" Miners condemn themselves with such questions.

Good Samaritan Learza Thiesant informed Vohkeheva about the Code. The miner was ignorant. Dangerously so.

Vohkeheva couldn't believe that he'd need to pay a token fee to legally mine in New Order territory. But when Agent Fate and Destiny showed up, she confirmed everything Learza had said.

The miner was baffled: PvP in highsec? That wasn't the EVE he remembered. True, things were different before the Code. They're much better now.

Agent Fate was curious about the miner's aptitude for EVE, so she used a classic litmus test: Mention the name of the Saviour of Highsec. The miner's reaction to it will tell you everything you need to know.

Let the record reflect that Vohkeheva chose to be angry and upset. He was given the option of calming down and reading the Code. He didn't take it.

Tobin Enchari was one of those "the Code used to be cool" guys. He mourned the end of bumping, which apparently nobody does anymore. (Tell that to the freighter pilots--or the miners of Mission Ready Mining, for that matter.)

Vohkeheva maintained his innocence: He wasn't AFK, he was just too slow to escape with his zero-align-time pod in bubble-free highsec.

In truth, miners get plenty of warning about the Code, especially since it's pretty much the only thing people talk about in highsec. But you need to be at your computer to read local.

Tobin offered his services as a pro bono space lawyer. Fate and Destiny ignored his nonsense. The explosion of unlicensed miners was more than enough proof of her authority as an Agent of the New Order.
Posted by MinerBumping at 17:26