From Toad to Prince, Part 2

Previously, on MinerBumping... Agent Aaaarrgg was doing his part to save highsec when he happened upon a scandalous AFK miner in a Madirmilire asteroid belt. Prince Ugly admitted that he only played EVE because he could "play" the game AFK--while he was at work!

The miner expressed his unorthodox view of video games. According to Prince, one must choose between working full time or ganking miners full time. He chose to work, which meant that he needed to spend all day idling in the asteroid belts of highsec.

It only got worse. Prince's entire week was dedicated to AFK isk grinding. He wouldn't even take a day off to enforce the Code. What a Scrooge!

Prince finally took the time to read the post-gank termination notice that our Agent had sent him. The miner claimed to be playing EVE and arranging his life the way he wanted to, but his foul mood proved that he wasn't enjoying himself.

Aaaarrgg tried to open Prince's eyes to what was possible in EVE. The carebear deflected, throwing his own grandmother under the bus. What kind of person does that?

Then, out of the blue, Prince asked a question about how to buy a mining permit. Could it be...?

Prince was a singularly unlikely candidate for permit ownership. Until now, he'd been as hardened and stubborn a bot-aspirant as our Agent had ever seen. But there's an old saying that goes all the way back to the early days of the New Order...

"My wallet is filled with the isk of those who said they would never pay."

There was no denying that Prince Ugly had transferred the money to buy a permit. Yet he had done so in a sarcastic manner. Was he really going to follow the Code, or was this some sort of 10 million isk joke?

Agent Aaaarrgg was watching this miner like a hawk. At the first sign of non-compliance, ganking would resume.

The conversation took another sudden and unexpected turn. But our Agent stayed focused. On target.

Aaaarrgg's persistence paid off. There were plenty of times when it would've seemed reasonable to give up on Prince Ugly. However, Agents of the New Order all share an unshakable faith in the ultimate triumph of the Code. 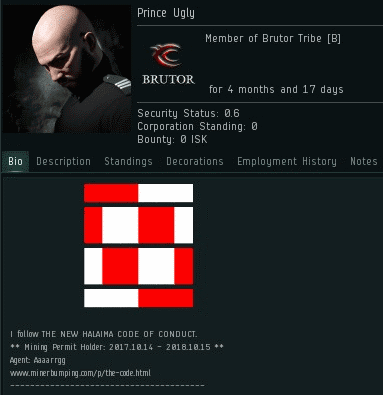 The miner placed his newly purchased permit in his bio. Even so, he used small text for the permit. Aaaarrgg remained watchful.

It's easy for miners to be tempted to return to their old ways after purchasing a permit. Luckily for them, they're constantly monitored by a team of heroic Agents--the people who make EVE what it is.
Posted by MinerBumping at 18:26