We've seen how heroically our Agents conduct themselves when dealing with a Gallant miner or with a hardened bot-aspirant. But how should an Agent of the New Order deal with ambiguity?

Covetor pilot Mike Jinsu was terminated by ganker from the mighty CODE. alliance. On the one hand, Mike offered his sincere congratulations to the ganker. On the other hand, the miner also made empty threats and pretended to have powerful friends. 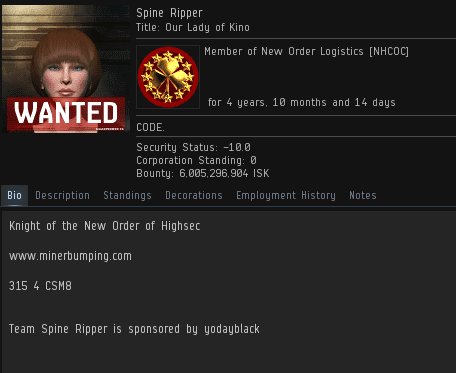 Agent Spine Ripper, the ganker alt of Bing Bangboom, is one of the longest-serving members of New Order Logistics. Bing is an optimist. The miner had offered the equivalent of a "gf", so maybe he'd be willing to buy a mining permit. Spine Ripper invited the miner to a private convo.

If Bing wanted to play hardball, Mike was more than ready. If necessary, he had powerful friends who were willing to sit around watching him mine all day.

More ambiguity: Mike admitted that the gank was well executed. Yet something seemed to hold him back from embracing the Code.

It was time to fight. Mike had an entire incursion fleet at his disposal; apparently they were willing to take a break from grinding isk to chase Spine Ripper around an asteroid belt.


Spine Ripper > I can't fight long in highsec... the police come... can I send my alt?
Mike Jinsu > We can duel
Bing Bangboom > duel?
Mike Jinsu > Holy shit
Mike Jinsu > What is with you dumbasses
Mike Jinsu > You think you can make me cough up 10 million

At the mention of a 1v1, Spine Ripper invited his main character, Bing Bangboom, to join the convo. Bing enjoys 1v1s.

Now the miner was entering what you might call the "flopping around like a fish out of water" stage of the conversation. Mike couldn't make up his mind whether he had powerful friends, or was willing to engage in a duel himself, or was a defenseless newbie who should be left alone.

As an elite PvP'er, Bing was willing to cut Mike a break by dueling him with a mere frigate. Strangely, this scared Mike.

Bing was a little disappointed. Rebels claim that our Agents don't shoot ships that can shoot back, but whenever one shows a willingness to do so, the rebels run for cover.


Bing Bangboom > Are you getting your incursion friends to come guard you mining?
Mike Jinsu > Why would I tell you?
Mike Jinsu > and why the fuck would I mine when I can run incursions
Mike Jinsu > Fuck off I'll never give you a penny for any bullshit

Mike went from mixed signals to total confusion. Did he have friends in an incursion fleet? Did he run incursions at all? Was he a miner? Did he want to duel, or did he want to be left in peace?

One thing was certain: The miner wasn't willing to put his battleship where his mouth was. There would be no duel that day--except with words.

Though Mike suggested that nobody would mine if they could run incursions, the miner insisted that he was an incursion runner.

Out of nowhere, Mike invited someone named Kalista Ohu to the convo. Was she his powerful friend--and did Bing stand a chance in a duel against her?