The New Order is famous for destroying some of the juiciest, most expensive targets in EVE. But it's not only the decadent bling-boats that get ganked by our Agents. Big or small, the Code comes to them all. 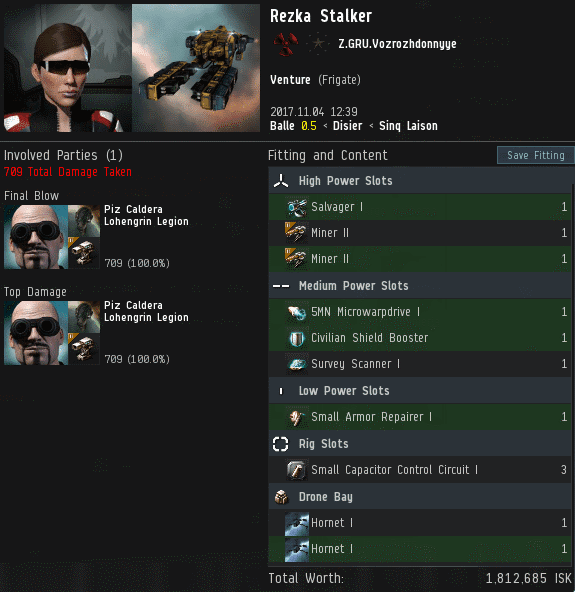 Still, you might look at this killmail and think it was overkill: Agent Piz Caldera popped a Venture with a tech II fit Vexor. There's more to the story, though.

Agent Piz didn't sacrifice his Vexor. The Venture and his alt decided to attack Piz with their drones while he was suspect. (So much for ships that can't shoot back--they shot first!) It was on. Piz ultimately triumphed in the battle that followed.

Rezka Stalker couldn't handle losing, so he placed a bounty on Piz instead of buying 10 mining permits. 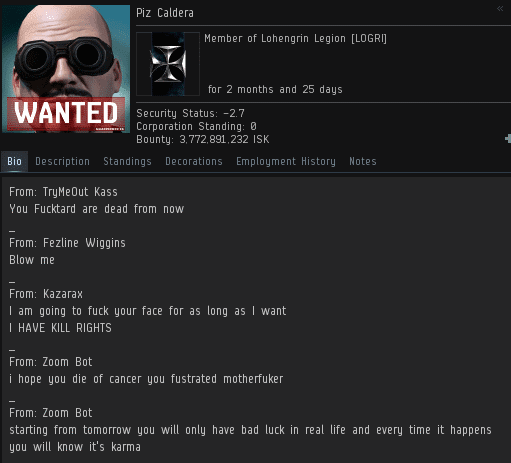 Piz Caldera is used to this sort of thing. He's one of the countless New Order Agents who, despite not being a member of the mighty CODE. alliance, has managed to become a celebrity in highsec. Enforcing the Code tends to have that effect. 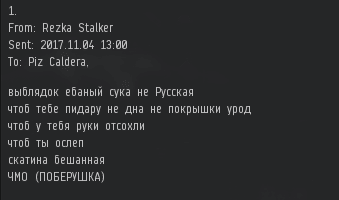 A few minutes after wasting 100 million isk, Rezka sent Piz an EVEmail. Our hero didn't feel like running the message though a translator, and he didn't really need to. He immediately knew how to answer it:

I'm sure our Russian-speaking Agents will confirm that this was an appropriate reply.

Rezka was triggered by Piz's writing to him in English. (But to be fair, since CCP Leeloo was fired, Piz's EVEmail might be the closest thing to customer support Rezka is going to get.)

The miner couldn't wait for a reply. A few minutes later, he began to fire off a series of EVEmails to Piz.

Rezka assumed that Agent Piz would answer promptly. He didn't realize that our Agents are very busy--they've got all of highsec to run! 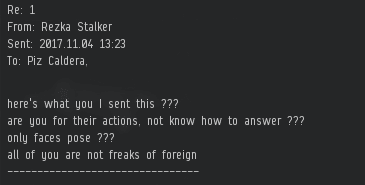 The miner continued to sit at his keyboard, waiting for Piz's answer. He grew impatient. 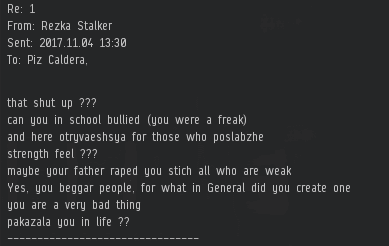 Nearly half an hour had passed since Piz's last communication. Rezka still wasn't calm. In fact, Piz's silence was killing him. Would Rezka's pain inspire him to Code-compliance? Or would he become even more angry?

Or, perhaps, would Rezka's pain inspire something else entirely?