Previously, on MinerBumping... Agent Piz Caldera bested Rezka Stalker in elite PvP after the miner attacked our Agent with a Venture. Agent Piz was hopeful that the belligerent carebear could be reasoned with, but Rezka was angry about being spoken to in English instead of Russian.

Though Piz hadn't responded to any of Rezka's EVEmails yet, the miner was undeterred. Every time a new insult(?) popped into his mind, he sent Piz a message.

Rezka's ignorance of the New Order was on full display. Our organization is basically where all of the good people in EVE hang out. 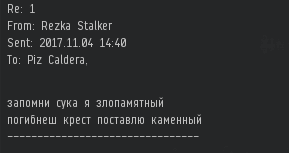 As time went by without an answer from Agent Piz, Rezka tried speaking in Russian again. Maybe the Agent would tell him to calm down, at least? Rezka couldn't stand the silent treatment any longer.

The next day, Rezka woke up and checked his EVEmail. Still nothing! He cursed our Agent yet again. But it was a new day, and the miner held out hope that Piz would write back. 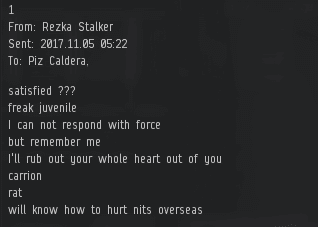 After another agonizing half hour of waiting, Piz still hadn't replied. Rezka was furious.

Rezka demanded an explanation. Is this what Agents of the New Order do? Blow up your Venture and not even write back the next day? For the next hour, Rezka sulked and wallowed in his pain. And yet, as they say, great pain can sometimes inspire great art. Rezka was inspired. 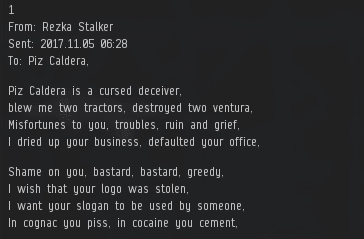 Putting pen to paper, Rezka composed a poem about Piz Caldera. I can only assume that the original draft was written in a spiral notebook and then transcribed to EVEmail. 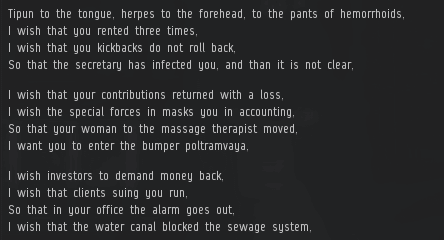 Though Rezka wasn't writing in his native language, he managed to put his thoughts into verse. It probably rhymes in Russian. 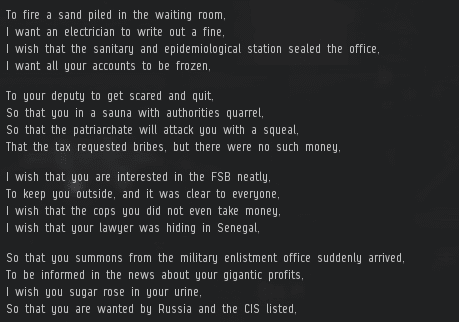 Rezka Stalker could have ended his career as just another Venture pilot ganked by the New Order. He had greater ambitions than that. With his pen, he hoped to gain immortality. Finally, the poem reached its conclusion. It was obvious that Rezka poured his heart and soul into his poem about Piz. Surely, surely, Piz would answer now. He just had to!

The miner wasn't thrilled to be reminded about his epic defeat. The miner put down his pen and returned to his normal self. What Rezka didn't realize is that Piz intended to meet him again. 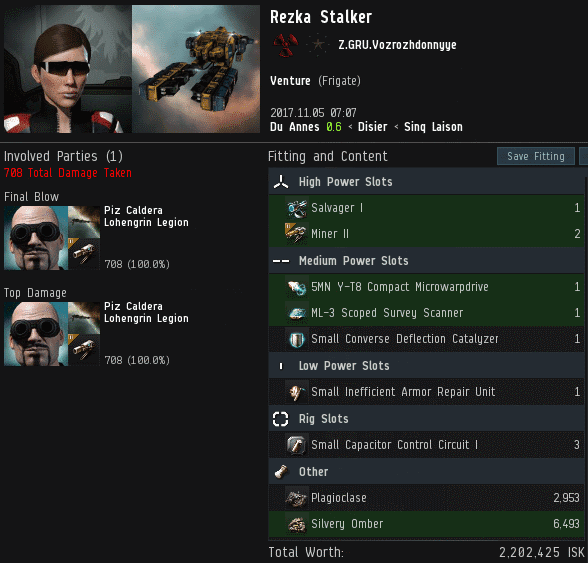 Only a few minutes later, Piz showed up in the same asteroid belt as Rezka and ganked his Venture. How would the miner react this time? Had he learned anything from his experiences and his poetry?

Same ol' Rezka. The spell was broken; the poem was an anomaly. Even so, the miner managed to earn a place among the greatest Russian poets of highsec.
Posted by MinerBumping at 16:52