Another ordinary day in highsec: An Agent of the New Order instructs a miner how to play the game. No big deal.

The situation evolves: Severus Dragon reveals himself to be one of those "I would've paid..." guys.

...And that means it's time for another edition of the Highsec Miner Grab Bag!

when Vaporize read the recent news about CCP cutting its staff, he didn't blame Hilmar like all those other people did. No, he blamed the mighty CODE. alliance. But there's a good reason why CCP keeps people like us around: I told CCP how to save the company and the game from ruin. You're not going to get amazing ideas like that from some AFK miner. 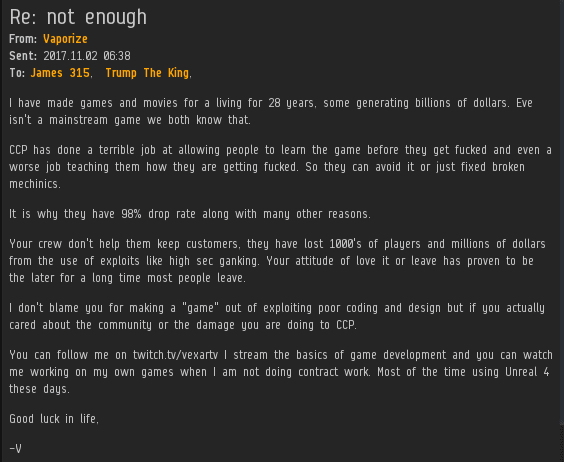 It turns out that Vaporize is the biggest deal you've never heard of. Though he's been playing since 2006, he still flies ships like this. I'm sure his movies are great, though. Ally K began spamming local when her Bowhead got caught by a bumper. She demanded to be ganked or let go...

She was ganked. It's probably not a good idea to "dare" an Agent to kill you when CODE. has over 50 trillion isk worth of ganks on its killboard.

"Relax in a non-PvP space sim." I believe I have identified your problem.

Zna4Ok was introduced to the world of MinerBumping in a recent post. He immediately gained a following; one Anonymous commenter even compared him to the legendary Mine Teck. Before long, Zna4Ok discovered that some of his EVEmails to Yucie Van Burean had been posted on MinerBumping. This was his response, titled "Excessive attention": 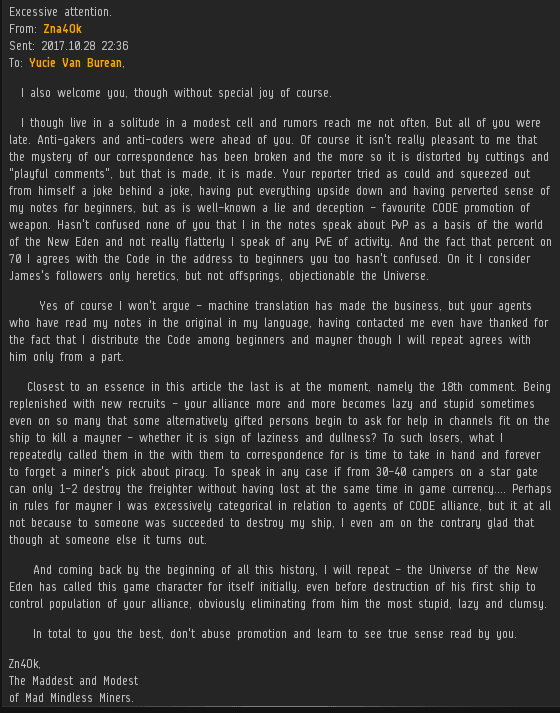 I give this EVEmail 3½ out of 5 strawberries.

If you want to trigger a carebear, tell him the truth.

I'll never understand why these miners, who don't know how to think about EVE properly, get mad when we teach them how to think. If some guy is flapping his arms like an idiot and you gift him a private jet so he can actually fly, would he get mad? Only if he was a Goofus. 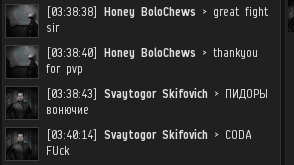 Svaytogor Skifovich lost his freighter, but he gained a new appreciation for the power of the "CODA". Not a bad trade, if you ask me.
Posted by MinerBumping at 18:58