Uh oh, you know what that means...

That's right, CCP Guard, it means it's time for another edition of the Highsec Miner Grab Bag! 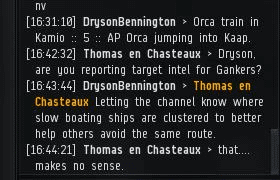 Earlier this week we read about DrysonBennington, who is always thinking up new ways to fail to stop the New Order. Even his fellow Anti-Gankers mock him for this. 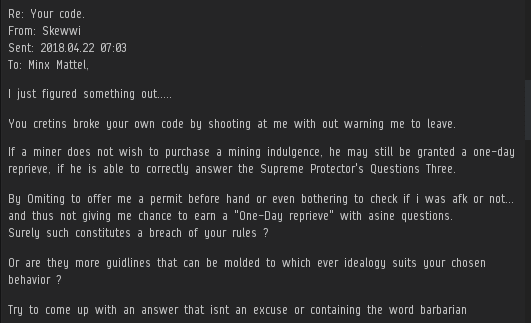 And here's another MinerBumping follow-up: Skewwi of the "Reading Dead" series is still trying to space-lawyer his way to reimbursement.

MinerBumping publishes miner tears, which lead to more miner tears when the miners read MinerBumping. The New Order makes the most of every resource in highsec. 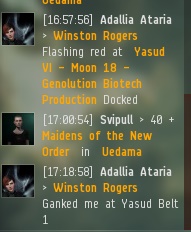 Adallia Ataria is a typical anti-Code intel chief: She warns people about gankers, and then gets ganked by them.

Some bot-aspirants try to hide behind a permit and a 10 million isk payment. These frauds then violate the Code and get ganked. How do we know they were bot-aspirants all along? Well, EVEmails like this one certainly aren't written by Gallant miners. 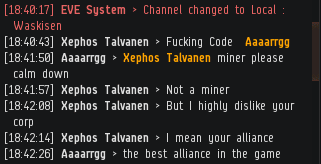 The mighty CODE. alliance must be the best alliance in the game--we have the most execrable enemies.

Candy Angel presented our Agent with an interesting dilemma: What should a miner do if her baby cries? Should she obey the Code, or should she go AFK to give the baby milk? Luckily, the Code is imbued with Solomonic wisdom. (And no, I don't mean to suggest splitting the crying baby in two).

The answer is simple: Either let the baby cry, or let the miner cry.

Ragnar Lothbrookes insisted that Agent Ralliana made a big mistake by ganking him. If so, the negative consequences were overshadowed by the loot Ralliana scooped. Presumably Ragnar meant that it was a long-term mistake of some sort.

Shaila Starflare is wrong. The Code doesn't say you can't shoot new players, so how is it not okay? Besides, I lost my first ship when I was a new player, and look how great I turned out. 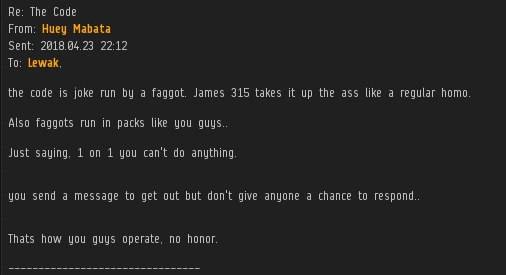 Huey Mabata bemoans the fact that our Agents "run in packs" with their fellow Code enforcers. Gee, I wonder why Huey doesn't have a bunch of allies of his own? 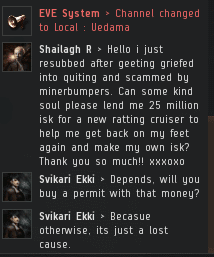 Classic rule of highsec etiquette: Always ask a beggar what they plan to do with the money. 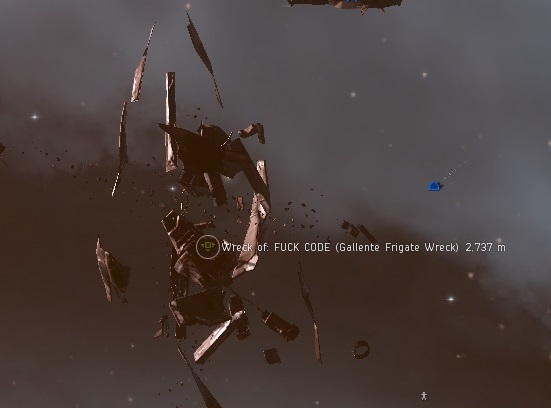 Two choices, carebears: Get with the Code or get wrecked.
Posted by MinerBumping at 18:50