Previously, on MinerBumping... Agents Minx Mattel and Lewak found themselves engaged in a spirited debate about highsec politics with Liu Yifei, a miner who demanded to know why his friend had been ganked. Liu wanted the satisfaction of knowing he'd won a debate against the New Order--but our Agents were playing for keeps.

Minx and Lewak wanted to sell Liu a permit. Unfortunately, the miner had nothing but contempt for the Code and those who enforced it. Needless to say, our Agents weren't working with fertile soil here.

Despite being a highsec miner--or perhaps because of it--Liu was extraordinarily arrogant and stubborn. You'd think mining Veldspar for ten years would teach this guy some humility.

As always, the name of the Saviour of Highsec worked miracles. Liu allowed himself to blunder into a humiliating trap of his own making.

Now Liu had to admit that he was wrong about something. It was the first crack in his carefully constructed persona. Our Agents did not hesitate to take advantage of it.

Attempting to mock the Saviour of Highsec proved costly; the haughty miner's confidence would never fully recover. The instant karma was further evidence of the Code's power. Still, our Agents were a long way from selling Liu a mining permit.

The miner could sense that he was on the defensive now. Even so, he felt that his résumé offered him some protection. Liu quickly scurried behind it and used it as a shield. Would it hold?

Once again, the miner was shattered. Liu's missteps and tactical withdrawals were developing into a full-scale rout.

As Liu ran for cover, our Agents advanced. It seemed as though there was only one way this debate could end: Total victory for the New Order. Only a miracle would save Liu now.

No, the miner would not be saved by a plot twist. His last hope swatted away by our Agents, Liu's focus rapidly disintegrated. He was going to lose this debate, but would someone like Liu ever actually submit to the Code's authority and buy a mining permit?

A rebel's rejection of the Code can be compared to a mental illness. And as with other illnesses, sometimes, just at the moment when all hope seems lost... the fever breaks.

Liu had been intellectually dominated by the two Agents. He'd tried anything and everything he could think of to argue his way out of the Code's truth. There was no escape, though. He had to admit that much.

Miners should know when they're conquered. In this case, the miner did. 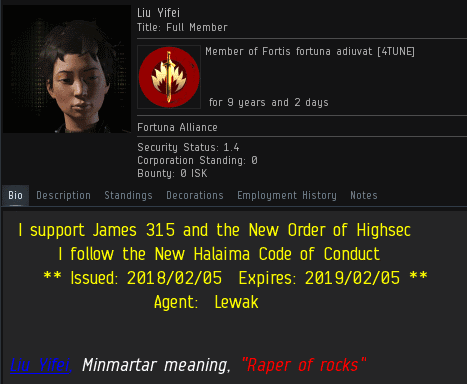 Liu ended up purchasing 60 million isk worth of mining permits. The New Order prevails on battlefields of all kinds; our Agents are masters of both rhetorical and spaceship combat. It's elite PvP, but it's not really a fair fight. They are armed with the Code. And the CODE always wins. Always!
Posted by MinerBumping at 18:40