Yikes. That can mean only one thing: It's time for another edition of the Highsec Miner Grab Bag!

Every carebear who plays the "I'm quitting EVE" card has a choice to make: They can claim to be an alpha account user, to bolster their claim of being a newbie--or they can say CCP is losing a paying customer. They can't do both.

Let's play a game of "long and short". We'll start with the shortest tearmail, which doesn't even include all four letters its four-letter word. Now the longest: 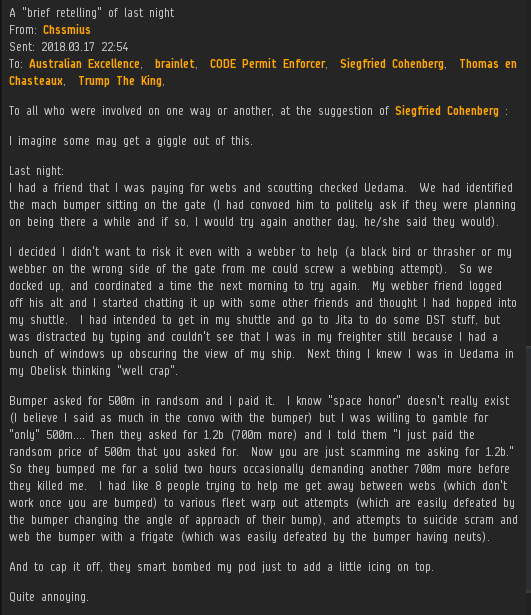 Thanks for the field report; we don't usually get them from the carebear's vantage point.

(Click image for larger version)
"Scrimped and saved for months playing a F2P account." How long does it take to save up 10 million isk?

irina81 Madullier was caught using a pilot-less Orca as a jetcan. After the ship was confiscated, she asked about getting it back...

She seemed willing to buy a permit. Surely the 10 million isk price tag wouldn't be an obstacle? Well...

It turns out that the "poor newbies leaving EVE" meme is more tolerable after being processed by Google Translate.

And then they say milk.

The New Order has honour, but it has something much better than honour, too: the Code.

(Click image for larger version)
Yeah, this guy sounds exactly like the "I would've paid, but..." type.

Roxie Eden admitted to being bored with EVE, but blames us for making her quit. Say what you want about the mighty CODE. alliance, but we don't make the game boring.
Posted by MinerBumping at 18:39