Previously, on MinerBumping... Former Mackinaw owner Skewwi could not calm down. He'd been justly ganked by Minx Mattel while "reading a thriller novel". Days after the gank, Skewwi was still sending angry EVEmails to the righteous Agent. With no obvious alternative, Minx Mattel chose to invite the miner to the MinerBumping channel.

MinerBumping is known for having the most intelligent, thoughtful group of people of any chat channel in EVE. Skewwi spat in their faces rather than listening to their wisdom.

It became apparent that Skewwi hadn't joined the channel in order to surround himself with good influences. Rather, he joined because he'd assumed that the Saviour of Highsec himself would be present.

Upon review of the channel's current members, Skewwi discovered that the Saviour was busy being awesome somewhere else. Now what?

Rebels are good at alienating people--even other miners. Skewwi busily put a torch to every bridge he could find.

Skewwi lashed out at everyone in the channel. Days earlier, he'd claimed that he didn't mind losing the Mackinaw. Yet he was getting surlier by the minute.

Now the miner became what he feared most: A spectacle, a joke to entertain the gankers he so despised.

If Skewwi had hoped he could persuade anyone to his way of thinking(?), that was looking pretty unlikely. Public opinion in MinerBumping was clearly against the unruly miner.

Skewwi was frothing with rage. He hated being corrected.

The miner returned to linking GIFs of middle fingers and toilet paper. He gave up. 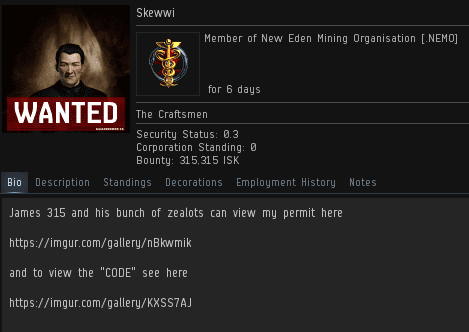 Like so many other rebels, Skewwi's bio reflected his decision to base his entire identity around his opposition to the Code.

The next day, Skewwi was still furious--especially since he hadn't heard from the Saviour.

It was the second time Skewwi compared me to "Negan". For those who don't understand the reference, Negan is a character on the hit TV series "The Walking Dead". I admit that I haven't seen every episode, but as far as I can tell, Negan is the show's hero. A tragic figure--too forgiving for his own good--Negan attempts to restore some semblance of order to a post-apocalyptic world, only to be opposed by a harebrained rebel named Rick who gets a lot of people killed unnecessarily.

Agent Galaxy Pig once made some artwork that seems particularly relevant here, so that will close out this post: