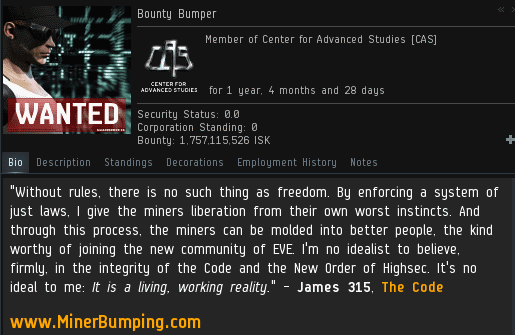 Agent Bounty Bumper lives up to his name: He bumps non-compliant miners, and they put bounties on him.

Bounty lives up to something else, too: the Code. That angers some people--like Lynn Jarvinen1, who accused him of being a griefer just for doing his job.

When Lynn's Orca went sailing out of range of the asteroids he coveted, he revealed himself to be a space lawyer.

Ever since the earliest days of the Code, miners have accused our Agents of breaking it. Of course, Code-violating miners have little credibility on the subject.

Even if a miner did have some credibility, he'd quickly lose it. Carebears have a tendency to misread and misinterpret everything put in front of them. The Code is no exception; miners conjure all sorts of provisions that do not actually appear in the document itself. 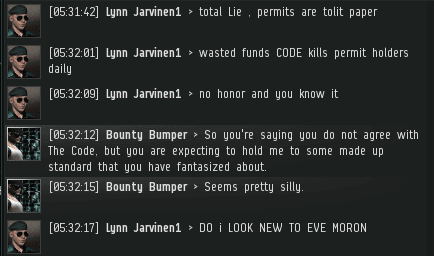 Among the most common "phantom" provisions is that an Agent is required to stop and ask a miner if he's AFK before ganking him. Lynn tried out a few whoppers of his own, including a provision allowing all non-bot mining. Agent Bounty called him on this nonsense.

Miners don't like being challenged. (If they did, they might pick a more challenging career.) Instead of admitting that he'd lost the argument, Lynn got angry with Bounty.

The miner was spinning so fast he couldn't keep up with himself. Lynn wasn't sure whether the Code was a smart scam or not.

Lynn's outbursts made Bounty wonder if this miner had experienced negative interactions with Code enforcers before. Something was up with this guy. Maybe it was the fact that his Orca was being punted across the asteroid belt like a football.

The miner had no choice but to recognize his own powerlessness in the face of an elite Agent of the New Order. Still, Lynn refused to buy a permit.

It turned out that Lynn had been previously ganked by Agent Guybertini a few times. The incidents occurred in 2017, but Lynn was still bitter all these months later. So much for "I don't care about that ship. The loss has already been replaced." 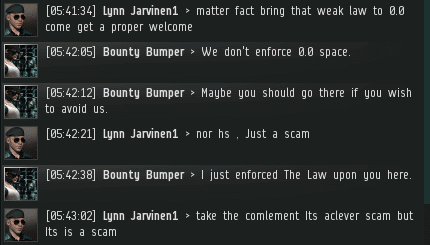 Bounty determined that Lynn's confused state of mind rendered him impossible to help for the time being. The solution? More punishment, until his mind cleared up.

The miner continued to argue about the Code, which in some cases can be a first step toward complying with the Code. For now, Lynn's Orca wouldn't be getting much mining done. It would serve as a convenient target for bumping practice, though--a better use for an Orca.
Posted by MinerBumping at 18:05