Time to talk about that Marshal kill. 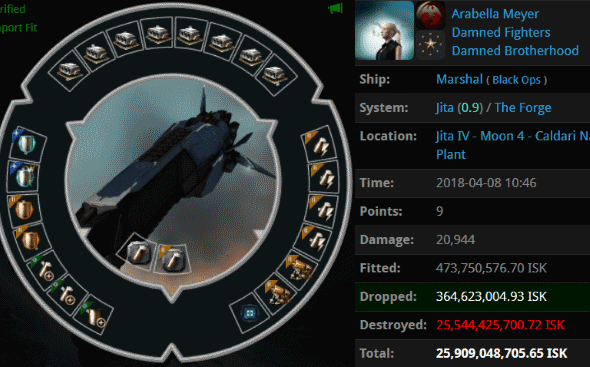 Arabella Meyer's was one of two Marshals ganked by the mighty CODE. alliance last week. Though less expensive at a mere 25.9 billion isk, Arabella's definitely had the worse fit. Or perhaps I ought to say "worst fit", since it would be difficult to imagine any Marshal with a worse one. Not only is it capacitor-tanked, it has gyrostabilizers, which are plainly not the module to pair with a rack of fireworks launchers.

Arabella is the CEO of Damned Fighters. The corp's description suggests a lot of confidence. Maybe the Marshal was some sort of joke, and was intended as a sacrifice when it undocked from Jita 4-4?

The gankers in question were Australian Excellence, brainlet, and a few members of the Tax Collector family. Five Tornadoes were used to bring down the Marshal. Several hours after the gank, Arabella congratulated our Agent--better late than never.

It seems that Arabella didn't lose her 26 billion isk ship on a lark; she regretted its destruction. It's possible that Arabella intended to equip the Marshal with proper weapons after creating a fireworks display in Jita. (As it turned out, her ship didn't need the launchers for that.)

Now Arabella sought to recover her massive loss through space lawyering. Agent Australian gave her a list of some of her Code violations. It wasn't an exhaustive one, obviously, since you could fill a book with the things Arabella did wrong. Afterward, Australian brought up the "blue pass", a service he and some other Agents provide to help facilitate travel in trade hubs.

Rebels like to say our Agents can't make a difference, but on this day they had put the fear of the Code into Arabella. She wasn't willing to undock until she'd heard directly from the Saviour of Highsec.

In fact, Arabella hadn't yet sent me an EVEmail. As soon as her convo with Australian ended, though, she immediately went to work composing one.

Arabella opened by giving credit to the bumper, which was thoughtful. They rarely get their due. Well done, Agent CODE Permit Enforcer. 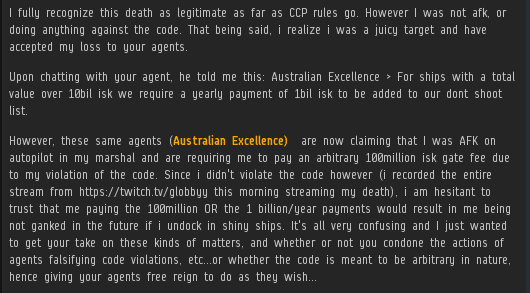 Despite previously telling Australian that the gank was "fairly run", Arabella insisted that she had been wrongfully ganked and was in full compliance with the Code. If that was the position she wanted to take, she probably should've purchased a mining permit. It was probably also a mistake to link her lossmail, since the ship she lost didn't exactly scream Code compliance.

As she approached the conclusion of her EVEmail, Arabella hinted at foul play on the part of the gankers. Once again she appeared to be backpedaling; a few paragraphs earlier she'd conceded that the death was legitimate under CCP's rules.

At this point it was clear that Arabella deserved to be ganked. The possibility of her receiving 26 billion in reimbursement isk was very remote indeed. But then, as always, the carebear took further action--just to erase all doubt:

Arabella was caught on Discord confessing to the filing of frivolous petitions against our Agents--with the intention of getting them banned! Doesn't she know that it's bad for CCP's revenues when people get banned? I thought carebears were all about player retention. 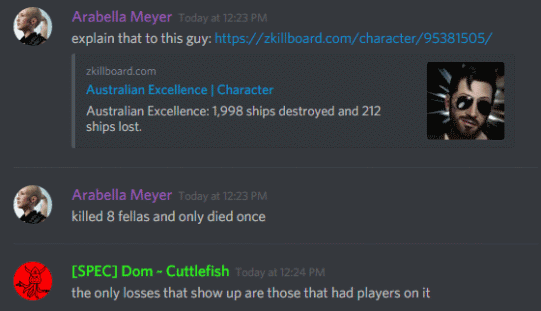 What a Goofus. At least the GMs will be treated to viewing a juicy killmail.
Posted by MinerBumping at 18:59