Previously, on MinerBumping... Agent Bob the Fourth cut a swath of goodness through the Solitude region. Even when faced with heavily tanked miners, Bob prevailed. Orca pilot Yanul Damar thought he could hide behind the block of EHP granted to him by CCP--until Bob's bumping ship sent him flying out of the ice anomaly.

Yanul couldn't think of a way to fight back, so he threatened to get CCP involved. Unlike most space lawyers, Yanul showed his work, citing an old thread on the official EVE forums for support.

The thread in question was authored by GM Karidor. Dating back to January 2013, Karidor's thread (which was a follow-up to CCP Falcon's thread from a few months earlier) was one of the New Order's great early victories. Several months after the dawn of the New Order, CCP had been forced to break its studious silence about the Code and address the topic of miner bumping in a special, pinned thread.


After speaking with Game Design and discussing the contents of the thread among themselves for quite some time, the GM Team has come to the following conclusion:

CCP considers the act of bumping a normal game mechanic, and does not class the bumping of another player’s ship as an exploit. However, persistent targeting of a player with bumping by following them around after they have made an effort to move on to another location can be classified as harassment, and this will be judged on a case by case basis.

Miner bumping had already become the biggest source of petitions related to EVE's rules, and CCP had no choice but to make a ruling at the highest levels. The bumpers won. Later in the thread, GM Karidor clarified the definition of "another location":


While it will involve inconvenience, we will have to see that one actively tried evasion before we consider someone being followed around and harassed. Merely changing belts in the same system or moving a few thousand meters to another asteroid would not qualify in this regard. Ideally you would move to other systems and more than just one or two jumps to avoid being found again quickly, requiring some effort to locate you again (i.e. through locator agents)...

If the victim just moved next door, that could still be interpreted as 'general area of operation', if the miner starts changing regions and is still being followed around by the same person that keeps bumping in a regular manner then the intent is pretty clear.

In short, all of the anti-bumping petitions were frivolous. Of course, the carebears spent the next 5+ years petitioning about bumps anyway, just like Yanul threatened to do. And I'm sure they'll continue to do so. But the story doesn't quite end there:

Three years after the ruling, CCP CiD edited GM Karidor's post to say that it was outdated. CCP never bothered to come up with a new rule, though. So Yanul's proof that bumping was against the rules consisted of a pro-bumping thread disavowed by CCP.

Bot-aspirants never were good at checking their own cites. Agent Bob felt it was safe to ignore Yanul's space lawyering and continue to bump the unruly miner.

After the Orca was sent beyond effective range, Bob proceeded to bump other miners in the area. The New Order's bumpers are notoriously good multitaskers.

On occasion, Yanul returned to his keyboard, hoping that Bob had left--only to be bumped away again. 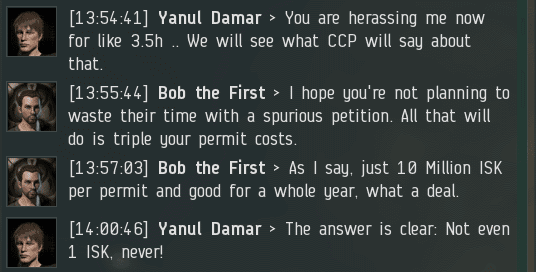 Yanul couldn't believe it: Hours later, Bob was still at it! The Agent rendered the system unusable. Yanul could've left, but he didn't want to be told what to do. 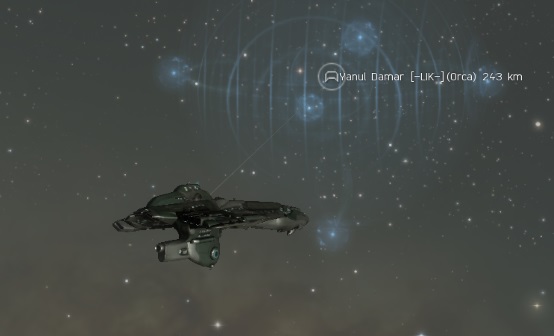 CCP never came to Yanul's rescue. His petition was probably collecting dust in a bin with thousands of other complaints about miner bumpers.

Finally, after nearly four hours of on-and-off bumping, the miner logged off in disgust. His day had been wasted.

Agent Bob was triumphant once again. As the Goofuses stood down, Gallant miners stood up to buy permits. 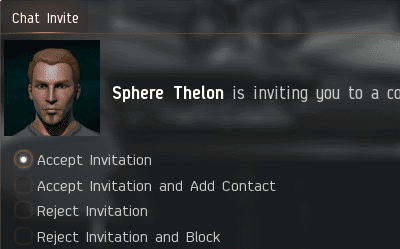 Bob formed relationships with the local Solitude communities and received a steady stream of intel from good citizens. They opposed the tyranny of bot-aspirancy, too.

The legend of Bob grew. Rebel miners spoke of him often. The very fact that they were speaking at all--engaging in the game instead of going AFK--was a sure sign of progress.

The whole region was transformed in substance and feel. As for Agent Bob, he was a celebrity, treated like a rock star wherever he went. 'Twas the power of the Code at work.
Posted by MinerBumping at 18:15