This Is Who James Is

Though autopiloting shuttles and pods have been hunted almost to extinction, the New Order still has a robust community of Thrasher pilots who roam from gate to gate. 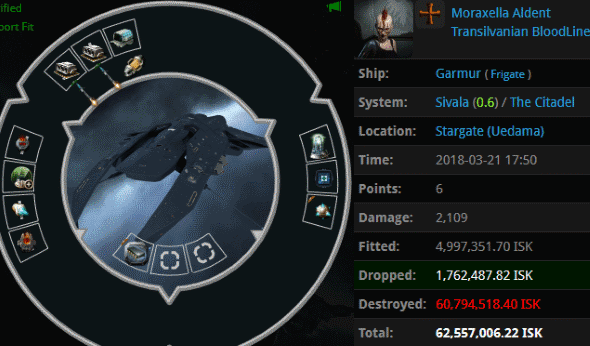 Thrashers also gank other small targets, such as this Garmur-class frigate.

Agent K0mand0 Sperg received a puzzled EVEmail from Moraxella Aldent, the Garmur pilot. She'd apparently been AFK for the past two hours, and she was unable to understand how she could've lost a ship.

Moraxella demanded to know what motivated K0mand0's gank. She told her. 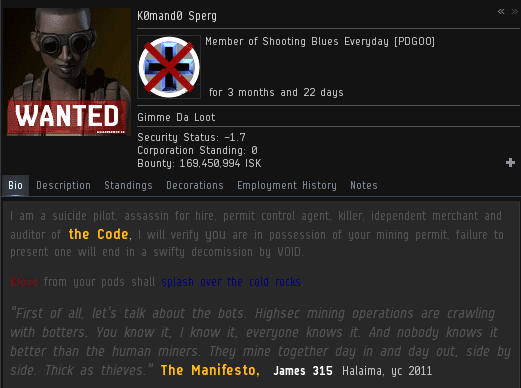 In contrast to all the miners and carebears who say, "I'm not really a miner" or "My real character is on another account," our Agents are totally transparent about who they are and what they do.

Moraxella denied knowing about the Code or the Saviour of Highsec. At the mention of my name, the carebear showed her true face--and it was a vulgar one.

And yet, Moraxella's question was one that many unenlightened EVE players ask. The question is not "Who is James?" precisely, since almost everyone in the game has heard of me. They want to know what I'm about. They want to understand my essential nature.

The answer is a simple, if indirect one. To know me, one need only look upon my Agents and observe their actions. 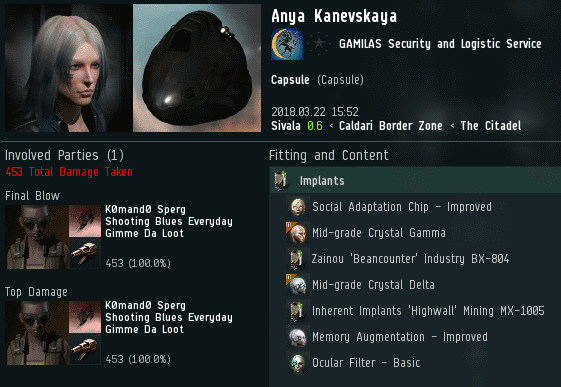 The next day, Agent K0mand0 once again displayed the nature of the Saviour of Highsec by putting the Code to practice. This time, K0mand0 ganked a Leopard and the 619 million isk pod it was carrying. It's always nice to see another Leopard get eliminated.

K0mand0 celebrated the kill by praising me in local. By chance, Moraxella was in the same system. Hearing my name triggered the carebear again. 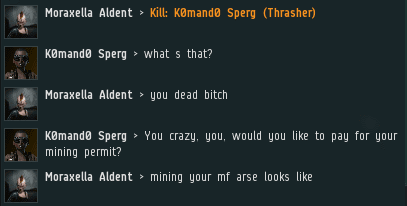 But this encounter between K0mand0 and Moraxella would be different. As is typical for gankers who use Thrashers, K0mand0 had been blapped by stargate sentry guns almost immediately after killing her target. She didn't have time to notice that Moraxella had used an Orthrus to take a shot at her. Of course, Moraxella did too little damage to make a difference, but it enabled her to get on the sentry guns' killmail.

K0mand0 realized that Moraxella was motivated by a desire for revenge. Instead of autopiloting in a frigate, the rebel was camping gates in an Orthrus and trying--but failing--to make a difference.

Moraxella's heart was pumping now. She was so excited about getting on an NPC's killmail that she slipped into another language.

On the one hand, it was good that Moraxella was at least attempting to play EVE now, rather than merely AFK autopiloting all day. On the other hand, she was a rebel--one who hadn't learned her lesson. She left her Orthrus idling by the stargate. 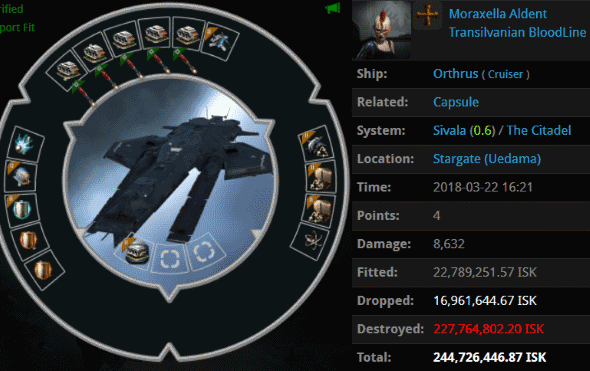 ...Where it was promptly ganked by K0mand0 and some friends from the mighty CODE. alliance. The carebear can't really complain, though. She wanted to know who I was, after all.
Posted by MinerBumping at 18:33