Previously, on MinerBumping... Agent Bob the Fourth's return to the Solitude region started off with a bang--the explosion of Selina Harekay's Covetor. Despite having been bested in elite PvP, the miner was contemptuous of the Agent. Yet she was utterly powerless to stop him.

For hours, Selina remained docked, waiting for Bob to leave. With nothing else to do, she decided to engage in conversation with a fellow EVE player.

The miner's attitude wasn't improving. As each hour passed, she grew more annoyed with her rapidly diminishing isk/hr average.

Selina logged in the next day, only to find Bob was still there. Disgusted, she packed up her things and left the system for good. She had mocked our Agent, only to be forced into a humiliating retreat. Such is the fate of those who rebel against the Code. 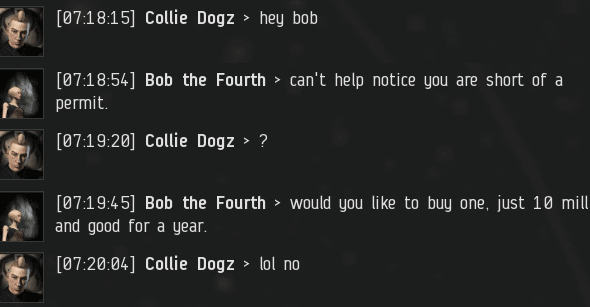 Bob resumed his patrols of the Solitude region. Thanks to his earlier, fantastically successful campaigns, many of the locals had mining permits. Those who didn't were invited to explain themselves. 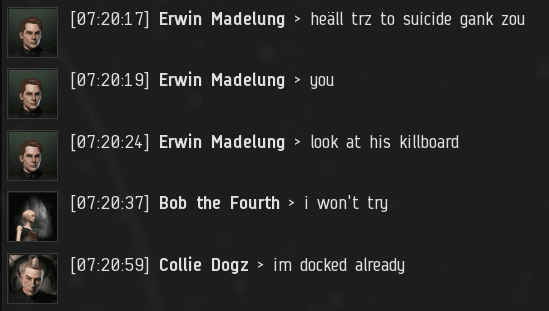 Many rebels complain about not receiving a warning before being ganked. They say they would've paid if asked. Bob likes to put that theory to the test. In Bob's experience, a warned Goofus is still a Goofus.

Though some miners claimed ignorance of the Code, they certainly knew of Bob's reputation. Rather than waiting around to be ganked, they docked up whenever he appeared. Incredibly, Collie Dogz was willing to lose hours of mining time, rather than spend 10 million isk on a permit.

Collie grew restless. He wanted to be at least a little productive while Bob was around, so he asked if he could kill NPCs. Not without a permit he couldn't.

It was obvious that Collie was in grave danger if he allowed one more day to pass without buying a permit. He'd been warned...

...And still he refused to buy one. In doing so, he condemned the entire population of "I would've paid if asked" carebears. 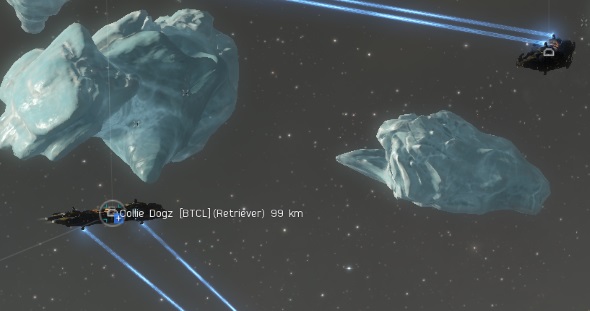 Not long afterward, Bob caught up with Collie, who was mining away in an ice anomaly. 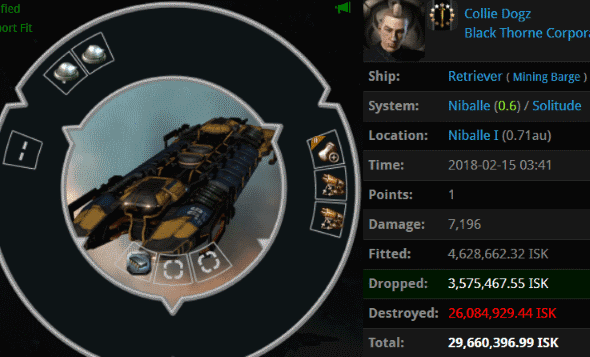 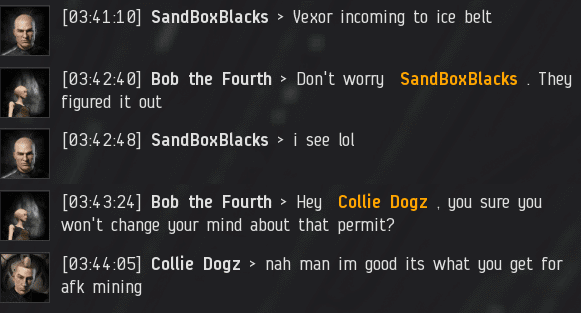 A fellow rebel tried to warn Collie in local, but as we've seen, warnings are wasted on Collie. On the bright side, the miner confessed his guilt and even admitted that he'd gotten what he deserved. Was Collie about to take the first step toward compliance with the Code? 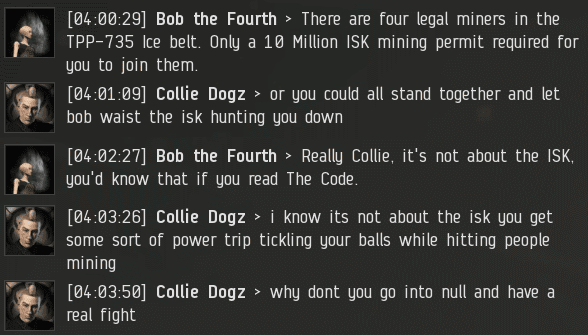 ...Or would he do the other thing?