People think I'm joking when I refer to a mining ship as being "capacitor tanked", but... 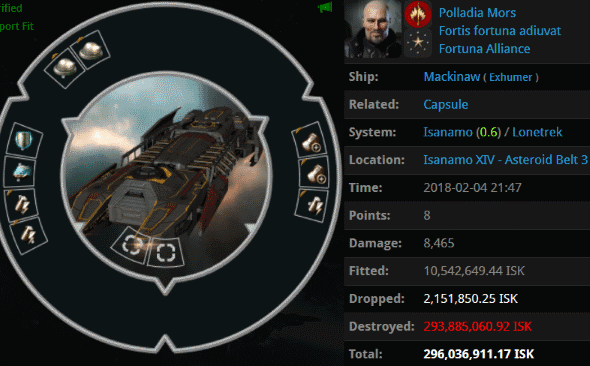 Polladia Mors was willing to sacrifice yield and tank to ensure that his Mackinaw had enough cap to run its strip miners. That is, until our Agents pulled the plug on it.

Polladia let the gankers know he wasn't happy. Before long, Agent Minx Mattel received a convo invitation from one of Polladia's corpmates. He probably wasn't happy, either.

Liu Yifei made sure Minx knew that Polladia wasn't really a miner; he was just a cool dude who liked to mine asteroids sometimes. This made sense. Liu and Polladia had been playing EVE for nearly a decade each. They must've been really casual about mining if they were still so bad at it.

Minx's fellow ganker, Agent Lewak, was pulled into the convo. In keeping with EVE's Terms of Service, they made sure the miner knew they weren't claiming to be acting on behalf of CCP.

Liu was confused at first, but then he realized that he was finally encountering that whole "player-generated content" thing he'd heard about.

The miner struggled to understand how it all worked. It was time for a lesson in political theory.

Minx began to quote the Code. Maybe if Liu was educated about the politics of highsec, he would come to understand how much he benefited from New Order democracy. However, Minx was soon interrupted.

Liu tried to evade it, but a noose of logic was tightening around him. Granted, American democracy isn't perfect like highsec's is; they have laws and a constitution, but they do not have the Code. Still, analogies are useful.

Taking his cue from the Agents, Liu tried analogies of his own. They didn't fit.

Next, Liu tried to escape by changing the subject. Our Agents were ready for him.

Of course, everyone knows that the Code is not a cult. I've explicitly said so, and the word of the Saviour is law.

Liu came into the convo ready for an argument, and he got one. Although the miner may have been looking to blow off some steam and defend his corpmate, our Agents had other motives for participating. They were owed money for some mining permits, and they intended to collect. But to do that, they'd need to win the debate so convincingly that Liu would have no choice but to concede.