The Center for Advanced Code Studies 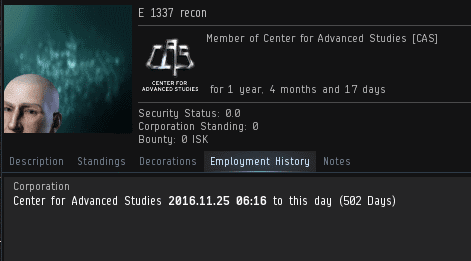 Members of NPC corps share something a little mysterious. They belong to a corp chat channel with a lot of players and potentially a lot of activity. Those of us who belong to player-controlled corps might wonder: What goes on in those channels? What do they talk about all day?

Good guess. Like pretty much everyone else in EVE, they spend a lot of their time thinking and talking about the mighty CODE. alliance.

The New Order is particularly relevant to members of NPC corps, since so many of them spend their days in highsec. Though a lot of NPC corp members are mad at CODE. for ganking them, we do have our supporters.

E 1337 recon, a member of Center for Advanced Studies, took it upon himself to defend the Code. He didn't care who judged him for it.

On occasion, right-minded players will say at least a few kind words about CODE. Those are the players who "get" EVE. They have a future in the game. The rest are carebears who are likely to wash out, preferably after dropping a bunch of loot.

No matter the place, no matter the situation, the Code always has an electrifying effect. It demands a reaction--and it always gets one.

If you've ever wondered how new players can be indoctrinated so early in their EVE careers, NPC corp chats are part of the reason.

In theory, NPC corp chats offer an opportunity for player interaction and a sense of community. In practice, the channels are too often a place where bitter old carebears infect newbies with their poison. This is terrible for player retention! The only antidote: Good people like E 1337 who speak the truth.

Even speaking the truth about the Code in an NPC channel is a revolutionary act. Those who do it are worthy of the title "Agent". They always win, because the CODE always wins. Always.

Unable to defeat our heroes in verbal PvP, the carebears are forced to add Agents to their "block" list. No matter. The open-minded players can still hear our Agents speak--and there's always more NPC corp Agents to carry on the crusade. 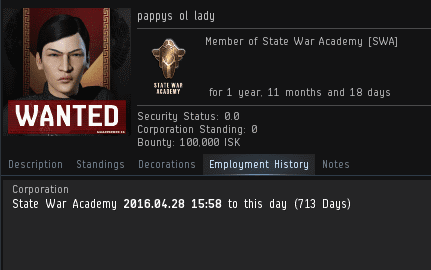 Center for Advanced Studies isn't the only NPC corp, of course. Consider how many people start EVE in State War Academy, for instance.

Yes, the Code is the topic of conversation in all the NPC corp channels. And yes, our Agents are everywhere.

Until the day when all highsec is compliant, the fight continues on all fronts.
Posted by MinerBumping at 18:05