Over One Trillion Five Hundred Eighty-Seven Billion in Shares Sold

A good man will help his friends... 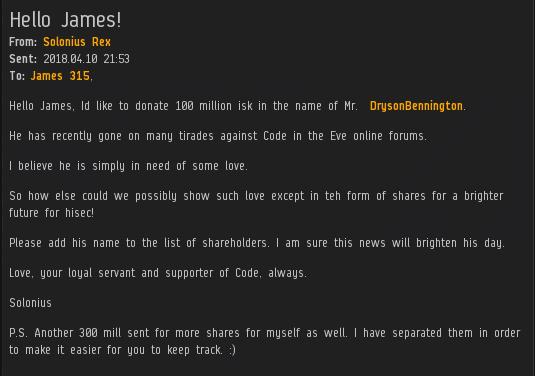 ...A great one will help his batty enemies. Solonius Rex demonstrated unquestionable generosity by giving a gift to one of EVE-O's battiest bot-aspirants. In doing so, Solonius also helped fund the New Order's gankers. What a guy.

Instant karma: At the same time Solonius was helping his enemy and all highsec, he earned a Supreme Protector's Tip of the Hat™ for himself. Solonius' purchase of 300 additional shares of New Order stock took us past the 1,587 billion isk mark. Folks, you can't make this stuff up.

Agent Minx Mattel delivered another devastating blow to the rebels. Her weapon of choice? Data:

The so-called Anti-Gankers used to say that Agents only inspect and confiscate ships belonging to newbie players. But is that true? New Order Logistics has been running fleets every day for the last five days, and I have collected the age for all miners that have failed their permit inspection. The average age has been 4.6 years, which is far from being newbies.

Included is a graph for the average age for the last five fleets. 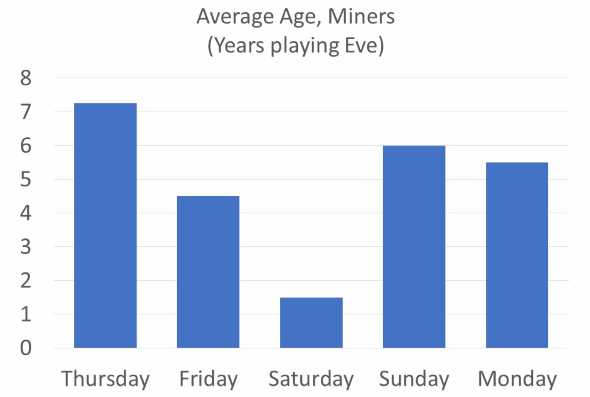 "Newbies" indeed. It's incredible to think that people can be so bad at EVE after so many years in the game. Even more shamefully, they sputter about "newbros" and "CCP revenues". And they wonder why we gank them?

Agent Australian Excellence proudly announced another Venture-Killing Contest. It's a fine tradition. Carebears complain about "newbros" being ganked, but as we've seen, they'd make the exact same complaint even if the targets were jump freighters. Here's the text of Australian's announcement, just in case you don't feel like going to EVE-O:

As we have in the past, the CODE. alliance is running a venture killing contest for 2018!

The event will be starting today and run till May 31st where we will hand out prizes to the winners who kill the most ventures in Highsec, make the best Video killing them or kill the biggest pod (that was in a venture).

There will be 5 prizes, 3 prizes for most killed, 1 for best video and 1 for biggest pod.

The prize pool will be increased over the contest period with donations from the generous pilots of New Eden.
All Donations to the contest can be sent to Australian Excellence.

Rules:
For more information you can ask in the minerbumping channel ingame or on our Discord!

We at the CODE. alliance are happy to bring this fun content to the community and hope it fosters some movement in an increasingly stagnant part of the game. Good hunting friends!
Posted by MinerBumping at 18:39