The Medal of Honour, Part 2

Previously, on MinerBumping... R.S.INDUSTRY corporation had a secret: It was filled with non-compliant miners. First-day recruit Levivity had a secret, too: She was an Agent of the New Order of Highsec. After she awoxed a freighter and two miners, Levivity's corpmates demanded an explanation.

It was just as Levivity had feared. The corporation was rotten to the core with bot-aspirancy. The Smitty openly defended the botters' "right" not to be ganked. 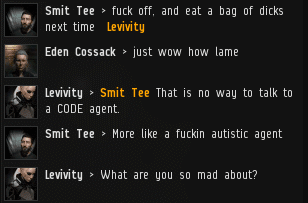 Levivity had explained the Code and why it compelled her to take action against the carebears in her midst. Now it was time for the rest of R.S.INDUSTRY to explain why they were rebels. 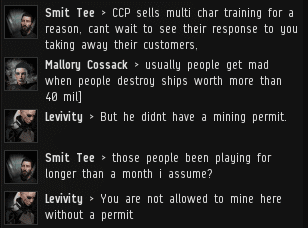 As usual, the miners defended themselves by appealing to CCP's finances. As if CCP would go bankrupt if everyone started following the Code. 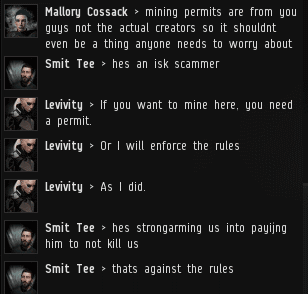 Smit Tee insisted that CCP would ban anyone who engaged in emergent gameplay. Imagine how boring EVE would be if the EULA had been written by miners. 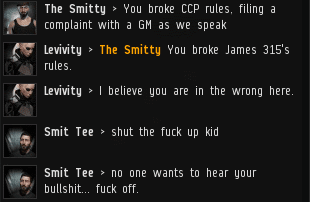 Another righteous gank, another frivolous petition filed. All in a day's work. 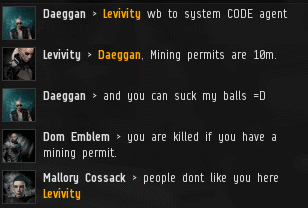 Levivity noticed that the atmosphere had become hostile ever since she revealed herself to be a Code enforcer. Maybe she should file a petition for discrimination? 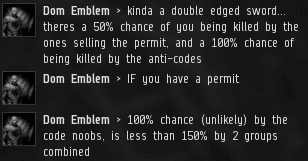 Since the earliest days of the Code, there have been rebels who floated the idea of ganking permit-holders. Some miners insist that they won't buy a permit because they'll be ganked by these phantom "anti-Code" forces. But after all this time, the rebels have never once managed to organize such an effort. 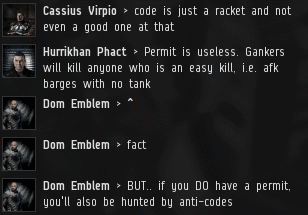 It's quite a dilemma: The mighty CODE. alliance has inflicted over 60 trillion isk of damages; the mythical permit-ganking alliances have inflicted zero damage. No one ever accused the highsec miners of being good at math, though. 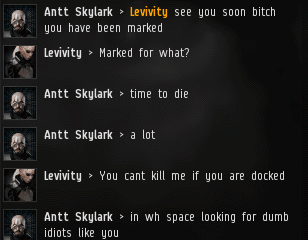 Levivity posed another problem for the corporation's "tough guy" carebears. Since she was an awoxer, she didn't need to remain docked after ganking. In fact, she simply remained in space, inviting retaliation from anyone in the corp who dared to face her in battle. This meant that the carebears had to come up with excuses for not seeking revenge. 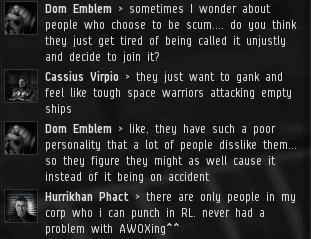 Until someone logged on with the roles to kick Levivity from the corp, the Agent would remain a thorn in everyone's side--and a constant reminder of their powerlessness. R.S.INDUSTRY had dozens of members, but none who were willing to undock while Levivity was still around. 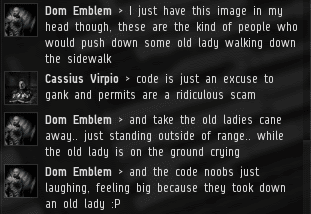 Some miners chose to embrace their impotence, comparing themselves to defenseless old ladies. No wonder CCP's marketing campaigns for EVE have targeted potential Agents rather than carebears: "Be a defenseless old lady" isn't a great sales pitch. 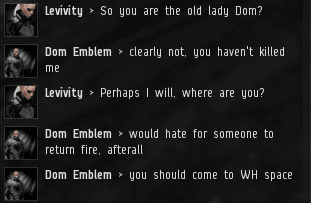 Alas, the corp's "heavy hitters" were all lost somewhere in wormhole space, far away. They couldn't protect their fellow corpmates. Mining would only resume once Levivity was kicked. 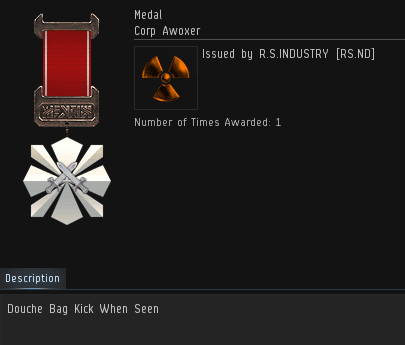 Our Agent would score one more victory before her time in R.S.INDUSTRY came to a close. The corporation awarded her the coveted "Corp Awoxer" medal. Now that's a medal of honour.
Posted by MinerBumping at 18:05