To commemorate the amazing milestone that is the one hundred fifty-ninth edition of the Highsec Miner Grab Bag, the first screenshot will come with two different captions for you to choose from...

Do you really want to embrace the Code, or are you just trying to piss off your old man?

Caption #2, which I include because of the miner's reference to speaking Spanish:

"Hello. My name is Sophie Louie Winter. You ganked my father..."

Actually, they don't have the death penalty in the UK. But we certainly do in highsec.

Ah, another one of those "I'm not really a miner, I was just experimenting" types.

What is it with miners and bathrooms? People wonder why we have a New Order Bathroom Protocol, but trust me, it's essential.

New Order democracy is much more efficient than the other versions. No wasted votes. 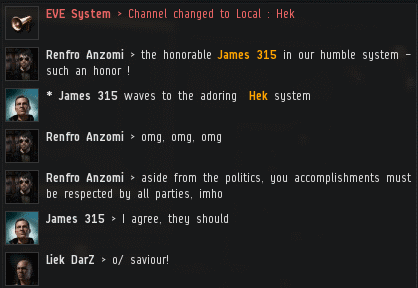 ...Besides, the people love me. All the good people, that is.

If you're thinking about starting EVE for the first time, don't bother with Steam reviews or articles written by video game "journalists". Ask an Agent if EVE is right for you. Better yet, read the Code. If you don't approve, find another game.

"A moral monster all returns." I think this is the guy who writes those weird episode titles that some shows have.

It's a good thing the Code doesn't make miners salty. 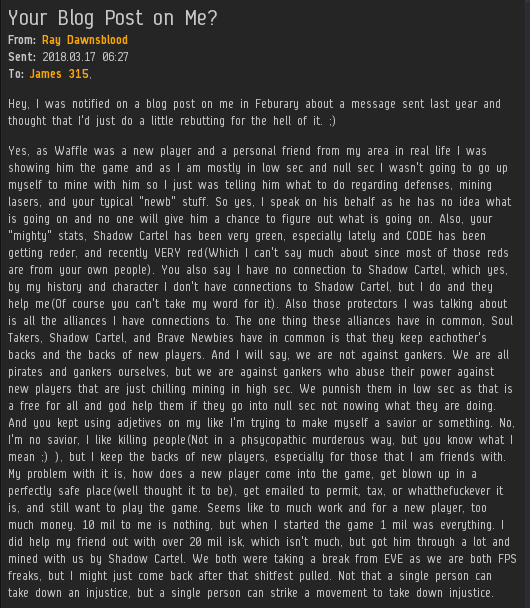 Ray, there's a reason why people read MinerBumping.com and not MinersTellTheirSideoftheStory.com. Formatting!

Viljar VVarde came up with a brilliant revenge plot: Put a bounty on the Agent who ganked him, and then try to collect that same bounty. A simpler plan would've been for Viljar not to spend his money on bounties in the first place. And I suspect it would've resulted in the same number of killmails. 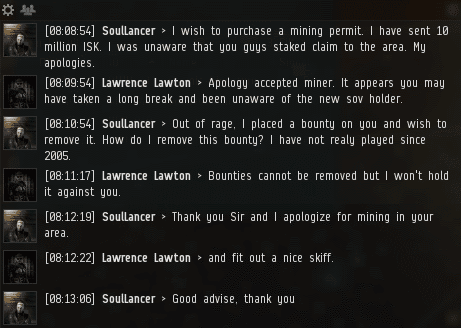 You see? A compliant miner is a happy miner.
Posted by MinerBumping at 18:10