The Agents of the New Order are basically the reason why the private convo feature exists in EVE. Random people are always contacting our Agents to ask them all sorts of questions.

Kathier Darkhearth had a question for our Agent--and he wasn't shy about asking it. 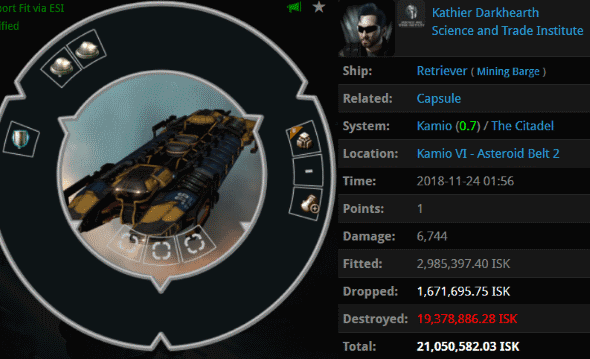 From Lawrence's perspective, this friendly chat was quickly turning into an interrogation. He found himself accused of botting and persecuting new players. Which is pretty ridiculous, since none of our Agents use bots.

Kathier chose not to disclose his evidence that Lawrence was botting. Presumably he would withhold the proof until an opportune moment, at which time Lawrence would be officially indicted. Until then, Kathier would investigate the alternative charge of newbie abuse.

Lawrence was perfectly willing to answer the accusation that had been brought against him. It also presented him with a chance to test out a variation of "miner calm down". It seemed to help.

And people wonder why I have the New Order Bathroom Protocol bookmarked.

Apparently Kathier's bladder was as weak as his Retriever's tank. As if going to the bathroom should grant a player invincibility in a competitive PvP game. Such a policy would doubtless have all manner of unintended consequences. 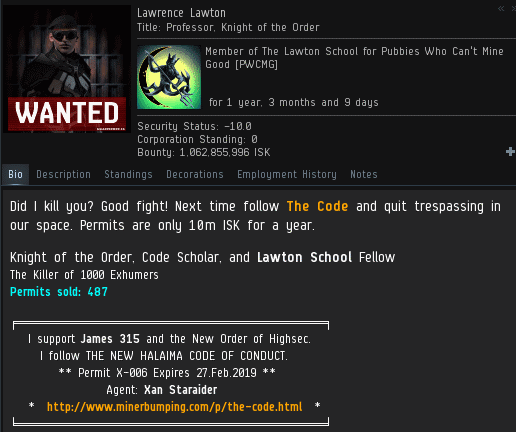 (The bio in question. Makes a pretty solid case, if you ask me.)

Kathier finally realized the argument was lost, so he beat a hasty retreat. He did not, however, learn his lesson.

Just a few days later, Lawrence caught Kathier again. By now, the miner had downsized into a Venture, but he was still illegally mining. We shouldn't be surprised. Considering how these miners treat their own computer equipment, why should we expect them to treat highsec any better?
Posted by MinerBumping at 18:01