We've had a lot of fun with the highsec miners over the last couple months. Without their daily torrent of tears, there would probably be a lot fewer posts on this blog. But have you ever wondered what happens to the miners after MinerBumping makes them famous? 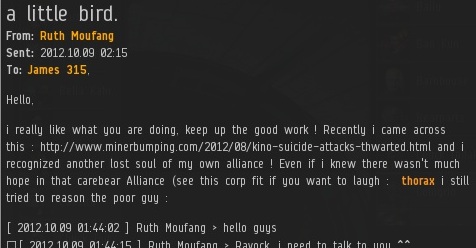 New Order supporter Ruth Moufang sent me the log of a conversation she had with an alliancemate after she saw his failures highlighted on an old post. 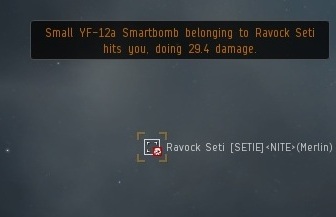 The rebel in question was Ravock Seti, whose claim to fame was an attempt to suicide gank my Invincible Stabber in Kino by using a smartbombing merlin. An unusual fit. But at least he used named smartbombs for maximum damage.

Ruth was curious if Ravock had any explanation for his dastardly deed. And had he seen the post in which his failure was publicized?

Ravock confirmed that he had gotten his share of razzings from buddies about the failed gank attempt. As I've often said, people would be surprised by just how many highsec carebears are avid readers of this blog. But Ravock seemed very confident about future attempts to destroy my ship. Winter is coming, indeed.

Ravock explained that originally there were plans for a fleet to gank me. His words are a little ambiguous, but it seems to me that Ravock began to fear the group may have been infiltrated by an Agent of the New Order. Ravock lost his patience and launched his attack solo. But you know what this means, don't you? If Ravock hadn't been so trigger-happy, we may have gotten to see an entire gang of smartbombing merlins!


Ravock Seti > well its his entertainment but that incident did get him band for 24 hours
Ruth Moufang > ban you mean ?
Ruth Moufang > what incident ?
Melchiades Seti > he gave me a -10 standing because I reported his ass for harrasment
Melchiades Seti > and it got him banned :)
Ravock Seti > when I attacked enough ppl protested that he got auto expelled from play for 24

Sad but true, there are still people who believe the false rumors about my being banned from EVE, even after all this time. The "auto-expel" thing is a new wrinkle to the rumor, and since I'm obviously still playing EVE, it's now a 24-hour ban instead of a permaban that they think occurred. A great study in how rumors can adapt and evolve--moreso than carebears, it would seem!


Ruth Moufang > anything to support that ? because he is looking really active on his blog...
Melchiades Seti > it was a while ago
Marcellus Seti > if keelum was around he'd fix his wagon
Melchiades Seti > keelum would spit torpedoes with his teeth and there would be no hope for him

If the Seti brothers ever happen to read this post, I would offer them this advice: Ditch the attitude. Don't put your faith in smartbombing merlins, winter expansions, auto-expulsion, or guys named "keelum" with torpedo teeth. Put your faith in me, the Code, and the New Order. You'll be better for it.
Posted by MinerBumping at 17:52