Arguing with an Officer of the Law

I often say that every dose of miner tears has a story behind it--usually involving ganks or bumps. Similarly, almost every gank has some associated miner tears. That's because miners understand that we don't gank indiscriminately. Agents of the New Order only engage in violent acts when they have exhausted every other option. 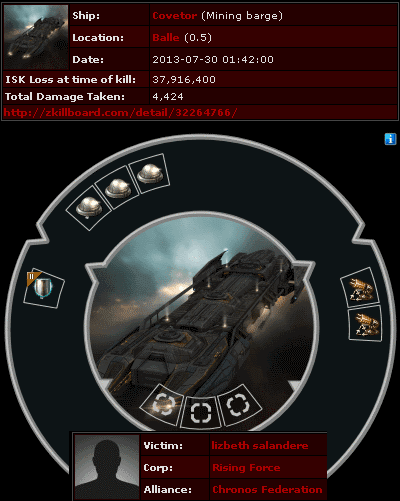 When Agent Lenda Shinhwa came across an untanked Covetor mining in 0.5 security space, he instantly realized that all other options had been exhausted, so he killed the miner. (In fairness, lizbeth salandere did have a Damage Control I, but it was safely tucked away in her cargobay.) 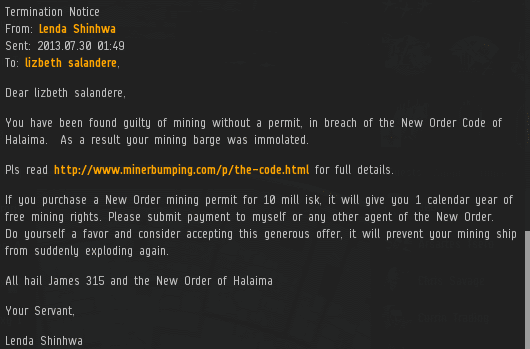 Pulling back the curtain, the above is a typical post-gank EVEmail delivered to a dead carebear. Every Agent sends some form of termination notice after ganking miners. Thus, ours are among the most well-informed gank "victims" in highsec.

The internet is marvelous. Today, every gank victim has access to a wealth of New Order-related information, right at their fingertips! But for some reason, lizbeth thought it was a good idea to mouth off to Agent Lenda, rather than being a good little miner and paying up. I was puzzled by lizbeth's "pulp fuction" reference until I looked up Agent Lenda's bio: 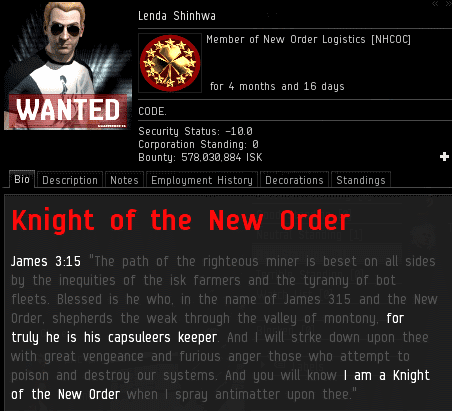 Agents live to help people. Many Agents' bios contain additional information about the New Order, just in case the termination notice wasn't enough. One look at Lenda's bio and you can immediately see what he's all about.

Over the past year, a lot of miners have gotten the impression that an Agent must first attempt to chat up a carebear before ganking him. That a misconception is common doesn't make it any less of a misconception. Given the resources at every carebear's disposal, and given our extraordinary fame, all highsec miners are deemed to be fully aware of the New Order and its Code. The fact that the dead miners so quickly jump to the "you should have warned me" excuse just highlights their guilt. After all, you can't develop misconceptions about something you didn't know existed.

Carebears are a strange breed. Their cowardice is matched only by their hypocrisy. They think it's wrong to shoot at something that "can't shoot back", yet their greatest ambition is to spend all day shooting at defenseless asteroids.

Imagine the horror of being attacked by giant robots, all of which are armed with deadly weapons and programmed with the sole purpose of killing you. This nightmarish scenario faces every ganker who shoots at a mining ship that carries drones. Are our Knights brave? You had better believe it. This is classic solo PvP. Forget all that "I'm completely solo except for my scout alt, booster alt, logi alt, ECM alt..." stuff.

Finally, we reach the pure, distilled carebear tears. This is what is left after all of the miner's excuses are carefully stripped away. With nowhere left to hide, the carebear is forced to reveal his or her true nature. It isn't pretty, but if a carebear is to be reformed, it's often necessary that they hit rock bottom. Try as they might, they can't dig their way to enlightenment with a mining laser. You gotta hit 'em with the Code.
Posted by MinerBumping at 18:58