EVE is a sandbox game. That means there is almost no limit to the problems that a carebear may face. And a carebear who represents himself in court has a fool for a client.

When people think of space lawyers, they think of Babatunde B Babatunde. The mere mention of his name sends a shiver down the spine of New Order Agents. 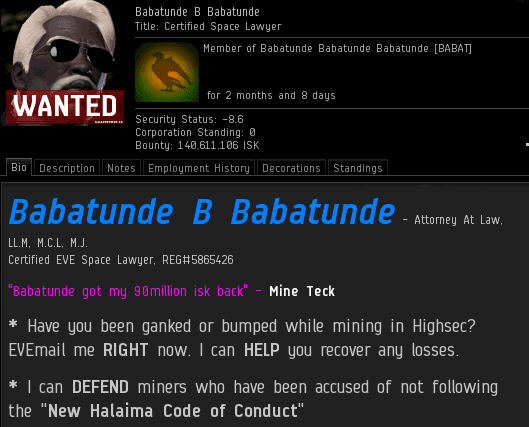 Babatunde first came to the public eye during the Mine Teck case. 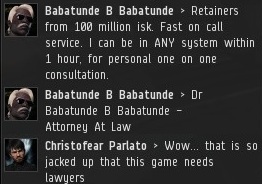 Ever since, he has been active in the highsec community, doing his best to wrap up New Order Agents in red tape. Agents just want to do their job and get the bad guys, but Babatunde makes sure every "i" is dotted and every "t" crossed.

He's kept us honest, though, and legal problems tend to resolve themselves. But then, suddenly... 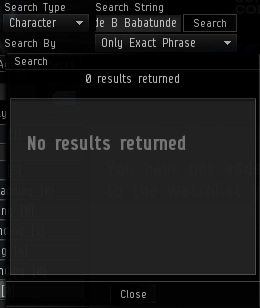 ...He was gone. Babatunde B Babatunde has disappeared from EVE.

Conspiracy theorists are quick to point to the fact that just before Babatunde vanished, he had been preparing what he called "the largest class action suit in the history of New Eden". On EVE-O, Babatunde wrote:

I have found a shocking loop hole in the New Halaima Code of Conduct.

I don't want to alarm anyone but I have spent the last few months building a case against the New Order of Highsec and I am 99.9% sure I can claim at least 25% of the 111 Billion shares sold by James 315 back. These of course should go straight back into the hands of the victim's - the miners of High sec space.

Please kindly deposit the measly sum of 5 million isk to me (for case expenses) to get your name in on the largest legal dispute in the history of New Eden. The more names I can get the stronger the case will be - so we all win.

Yours Faithfully,
Babatunde B Babatunde

Babatunde's plans for a class-action suit against the New Order immediately sparked curiosity. Eyebrows were raised concerning the mysterious "loop hole" in the Code. A few days later, Babatunde provided an update:


Ok guys listen up, first of all I would like to thank you all for the support so far, I have made plenty of Isk -- which will go straight into case funds.

The court date at the Supreme Court of the New Order is set for:

The location will be Kamio, this may upset some people as they might have expected Halaima, but I can assure you that it is a venue issue.

Please kindly continue to send me Isk so I can build an even stronger case against the New Order menace,

And then, just like that, Babatunde was gone without a trace. Many suspected foul play. When asked for comment, an official representative for the New Order simply replied, "Why are you asking questions about dead space lawyers?" 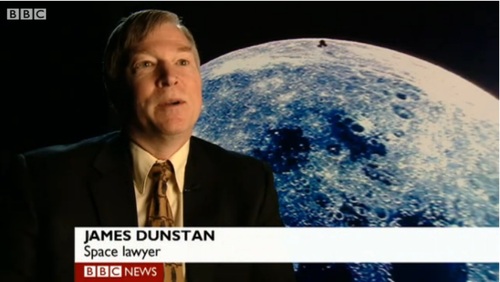 As Agent Malcolm Shinhwa pointed out, the profession of space lawyer is alive and well. However, the disappearance of Babatunde remains a mystery. Will it ever be solved? Only time will tell.
Posted by MinerBumping at 21:26