The True Test of a Man, Part 3

Previously, on MinerBumping... Rabid carebear Ria'ac Aideron fulminated against the New Order when Agent Lenda Shinhwa destroyed his Retrievers. But after some time, Lenda talked him into buying a mining permit and spending 30 million isk to get off the Red Pen list. With a pledge of loyalty to me in his bio, Ria'ac was on his way to a great new EVE career. 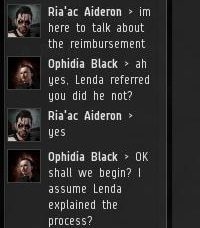 Lenda mentioned the possibility of getting Ria'ac reimbursed for the mining ships he'd lost. After asking around, Ria'ac got in touch with Agent Ophidia Black. She was more than happy to help a new convert. 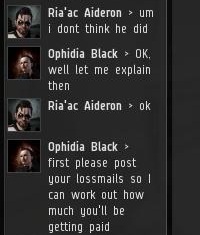 Since Ophidia wasn't there when the killings occurred, she asked for proof of loss. This gave Ria'ac a great opportunity to go down memory lane and think about his pre-Order days. 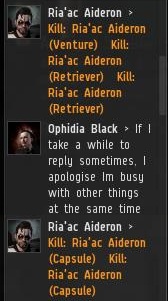 Death and rot. That is the only truth of the carebear existence. Without the Order and its Code, all miners are doomed. 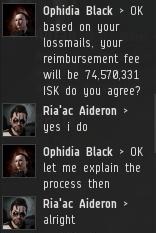 But now that Ria'ac was on board with the New Order, all of that would change. He could make a clean break with his sordid past. 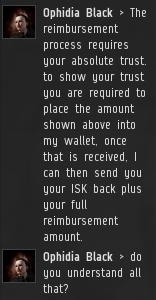 Ophidia offered to give Ria'ac back everything he had lost. But first she would need the same amount to be transferred into her wallet. If Ria'ac demonstrated total faith, she could double his isk, thereby reimbursing him.

This confused Ria'ac. He wasn't familiar with any other reimbursement plans that worked this way.

A speedbump was hit when Ria'ac revealed that his wallet was nearly empty. Ophidia was eager to help him anyway, and suggested another plan.

All Ria'ac needed to do was show total faith, and he would be reimbursed in a jiffy. 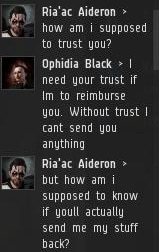 Things weren't off to a great start. Ria'ac was deeply skeptical and suspicious of Ophidia. 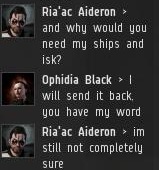 The good news was that Ophidia was being totally honest. She would give everything back and reimburse Ria'ac. Agents of the New Order are always true to their word. Would Ria'ac have the courage to take advantage of this opportunity?

Ria'ac had doubts. He knew from experience that he could trust the New Order, even though he had been on the Red Pen list only a few days before. Still, giving up all of his possessions was a lot to ask of a newly-reformed carebear. 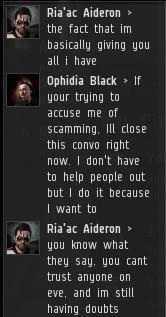 Ophidia was taken aback by Ria'ac's lack of trust. Reimbursement was strictly optional. She was under no obligation to help him out. 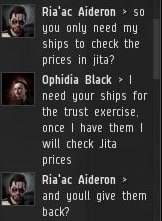 Despite his doubts, Ria'ac wanted the reimbursement. Ophidia wasn't lying; she would do exactly as promised. Ophidia Black would not scam Ria'ac, that much was certain. Could the Red Penned carebear Ria'ac Aideron take the final step and turn over a new leaf?