The Faith of the New Order

Previously, on MinerBumping... Mad rebel Jennifer en Marland and her alt suffered horrific losses when her plan to use two tech II fitted battleships to gank my Invincible Stabber backfired. 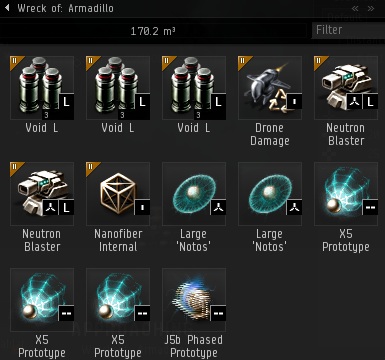 In the world of law enforcement, you don't always find a smoking gun. But the evidence of Jennifer's treason was staring the world in the face: Two large smartbombs that she intended to use to pod me--before everything went terribly right.

Everyone and his dog knows by now that I am a merciful ruler of highsec. It is not my wish that any rebel would have to suffer the consequences of resisting the Code. But because I am also a just and fair ruler of highsec, they do suffer said consequences. 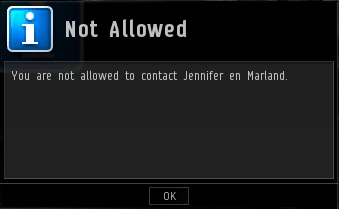 I hoped that after losing a third of a billion isk for no reason, Jennifer might be shocked back into reality. I had defeated her in honourable PvP. Since I am always magnanimous in victory, I sought to reason with her. She already had me on "block". 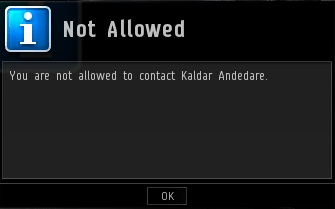 I tried dialing up her alt, but he already had me blocked, too. When people cut themselves off from society, they sometimes do weird things like suicide their battleships. My reaction was twofold. First, I was disappointed by Jennifer's intransigence. Second, I was puzzled by CCP's decision to title the dialog box "Not Allowed". Not very specific, is it? 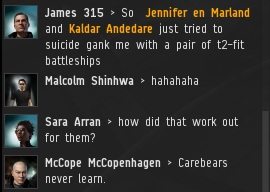 As Father of the New Order, it was my responsibility to report this attack to my Agents. It was important and amusing intel. 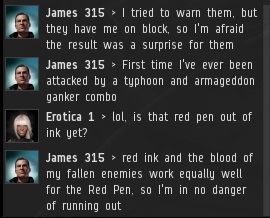 Most Agents were stunned to hear of the gank battleship duo. Every day the rebels sink to new lows, it seems. 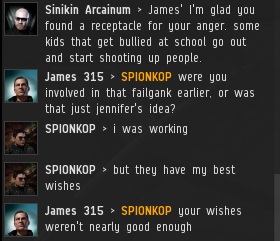 Meanwhile, I grilled the usual suspects in local for more information. Legendary curmudgeon SPIONKOP was skulking about, but he disavowed all knowledge of the attack. 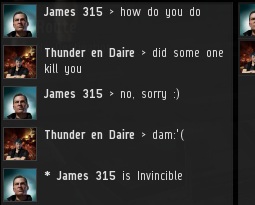 Then I received a convo invitation from a bot-aspirant in local. He wanted to know if the attack had succeeded. Upon hearing of my Invincibility, he terminated the convo. 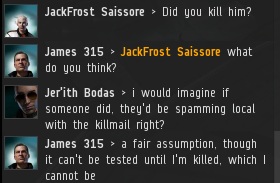 JackFrost Saissore, who had remained docked up since I bumped him an hour earlier, was also disappointed to learn that he wouldn't be able to resume mining. 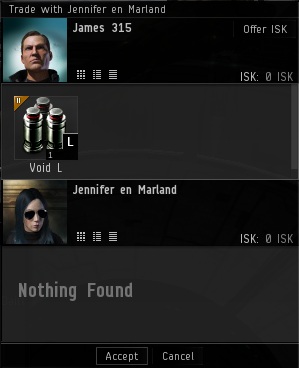 I returned to the station to dump the loot from the two battleships into my hangar. I noticed that Jennifer was docked in the station as well. Though it's impossible to speak with someone who has you blocked, you can still open up a trade window. I took one of the bullets from her wreck and offered it to her. 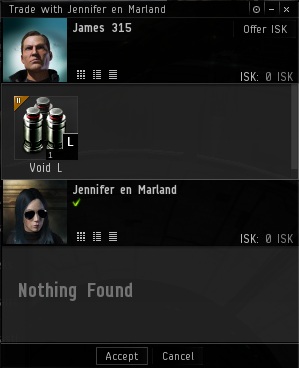 Jennifer is always silent. She has resisted all efforts that the New Order has made to communicate with her. The trade window remained open for a long time. Finally, a green checkmark appeared. She would accept the bullet.

There is much work to be done in highsec. We win hearts and minds on a daily basis, yet some miners close themselves off from us. They build walls around their hearts and minds, refusing to let anything in. Jennifer is among the most stubborn of these. When she accepted the trade, limited though it was, I couldn't help but feel that a bridge was built between our two cultures. For one brief moment, an understanding was reached. One day, everyone in highsec will live in harmony together under the Code.
Posted by MinerBumping at 21:19