Let's get down to business. In today's post, we take a look at some of the finer kills achieved by the New Order during the week of August 4th @ 00:00 EVEtime through August 10th @ 23:59 EVEtime. 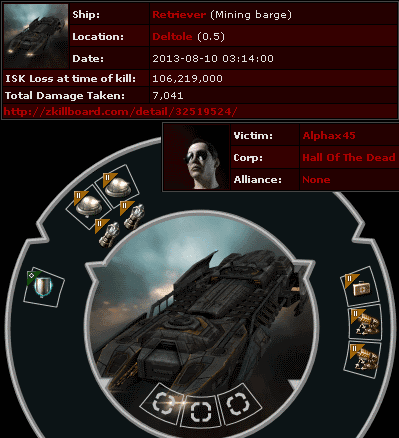 Alphax45 doubtless heard people talking about the importance of including a Damage Control mod on mining vessels. Very true, but he also decided to pilot a 106 million isk Retriever, so what was the point? It's a good idea to use your turn signal, but you don't get much credit for using a turn signal when you forget not to crash into walls. Agent Lenda Shinhwa executed the offender, though the Loot Fairy gave him no love. 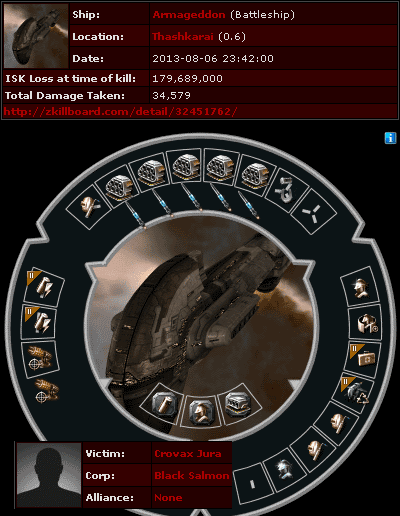 Crovax Jura demonstrated the futility of using a dartboard to select modules for his battleship. Agent DiaLatho, along with Agents Amarr Sentry Gun, CONCORD Police Commander, and Centii Enslaver did highsec a favor when they destroyed this monstrosity. But how did this occur? DiaLatho explained:

After all the trouble CCP went through to create a safety button and protect carebears from themselves... Well, you know what they say about patching stupidity. 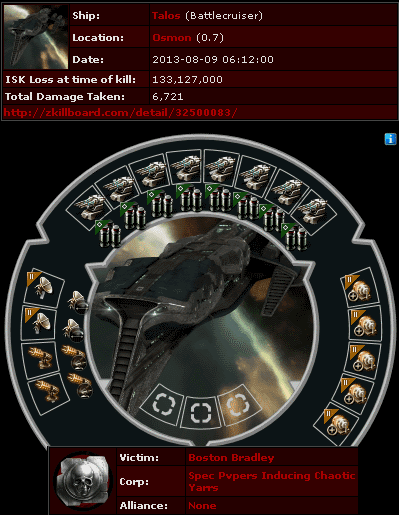 Meanwhile, Boston Bradley thought he would help protect the ice miners of the Osmon system with this abomination. Unlike Crovax, Major Arcaeus and Cmdr Arcaeus knew how to activate kill rights, and they quickly dispatched the rebel. Look at all those Warp Core Stabilizers! After many years of being an elite PvP'er, I've learned that you can't win a battle unless you're willing to go all-in. The Knights of the Code are willing to die for their cause; the rebels are always looking for an excuse to run away from a fight. 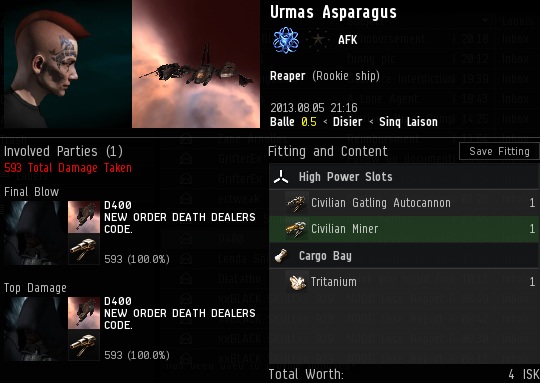 Urmas Asparagus tried to fly under the radar by puttering around in a rookie ship. But he put a target on his back when he joined the AFK corporation. Agent D400 showed no mercy: 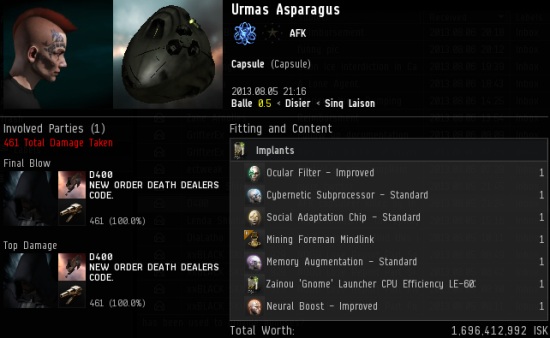 1.7 billion isk later, I think Urmas may have realized the error in advertising his AFKness. Sure enough, a Mining Foreman Mindlink was among the wreckage. It will facilitate illegal mining operations no longer. 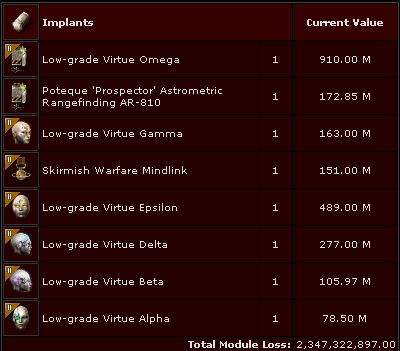 As usual, Agent D400 had no trouble sniffing out the pod of the week. Good Coffee was flying a shuttle until he wasn't. With the pleasantries out of the way, D400 blapped the 2.3 billion isk pod into dust. There sure were a lot of "Virtue" implants in that pod. But you know, you can't put a price tag on virtue. It's nothing something you can buy in Jita and plug into your pod--that's bot-aspirant logic. Virtue is earned every day by following the Code with honourable intentions. D400 had virtue, Good Coffee did not. It was only a matter of time before Mr. Coffee lost those implants. 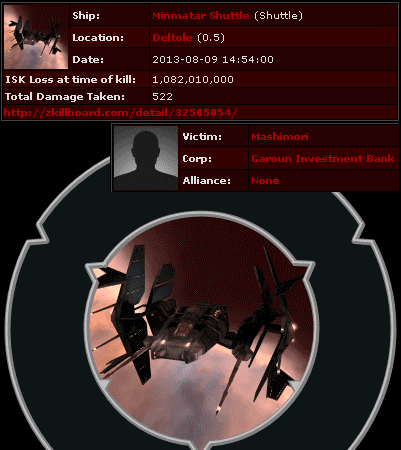 Okay, now it's getting ridiculous. Agent D400 killed Mashimori's shuttle. Was it housing an expensive pod? No. This time, the shuttle itself was the prize. Mashimori was caught in highsec behaving in a suspicious manner: He was flamboyantly warping from gate to gate, didn't have a permit, and couldn't spare even a few words in his bio to praise me. So D400 killed him. In the cargo of the shuttle was a pair of PLEX, worth over 1 billion isk. Needless to say, the New Order has a zero-tolerance policy when it comes to RMT, and Mashimori's hauling PLEX in a shuttle was both immodest and provocative. He was destined to die. Agent D400, like the rest of the New Order's representatives, served as an agent of destiny.
Posted by MinerBumping at 20:43